The Sea of Monsters Review: Percy 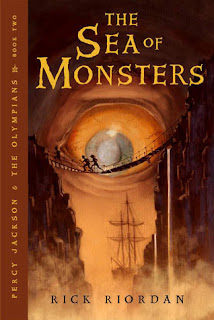 Book: The Sea of Monsters

Series: Percy Jackson and the Olympians

An excellent followup to the first book!


Percy Jackson has almost made it through one entire school year without anything blowing up on him--almost. Retreating to Camp Half-blood, the only place safe for half bloods like Percy, Percy finds that the wards that protect the camp from monsters have been dissolved. The camp's only hope in restoring the wards is to save Thalia's tree, the source of their wards, by finding the Golden Fleece, which is rumoured to have incredible healing powers. But nothing is ever as easy, especially with the titan Kronos on the rise...


This book introduces us to more of Percy's powers. As they venture into the Sea of Monsters, Percy is ultimately in his own home turf, completely surrounded by water. As the son of the Sea God, we get to see new powers as well as to what extent his original powers go to (it's pretty amazing). We're also introduced to the idea of fatal flaws by Annabeth, of how every hero has one, which leaves readers guessing what Percy's flaw is.

Annabeth brings new insight on the looming prophecy as well as new knowledge on what it's like to be a hero. Her fatal flaw, hubris (pride--in Annabeth's case, thinking that you could do a better job than the ones before), is revealed, letting readers sympathize with her, even wondering themselves whether they have hubris. Annabeth also sheds new light on Thalia, the half blood who sacrificed her life to protect all the other half bloods, and as we find out at the end of the novel, becomes important information.

We get a new addition to the team in this book: Tyson. As big and scary as he made seem, he's a big softy on the inside, and brought an air of innocence to the book. We get to see him struggle with being treated terribly for his nature, and Percy struggling to come to terms with Tyson and how to help him. Their bromance was definitely a great one, as they're both alone and really need another sibling figure in their lives.


This book focuses a little more on family, not just between Percy and Tyson, but also in an attempt to save Luke. We get to see what it's like to resent a godly parent for ignoring their children, as well as what how pained gods are when forced to ignore some of their children. It can be hard to see the other person's point of view, but you sometimes need to trust that they have a good reason...

This book was more based upon the fantasy aspects of the world, with more magical elements and monsters in the sea. There were no mundane laws they needed to abide to, no police to run from, not pedestrians of mundanes to avoid or explain their actions to. Just pure adventure, pure magic, pure fantasy and mythology.

"You live in both worlds. You can be harmed by both, and you can affect both. That's what makes heroes so special. You carry the hopes of humanity into the realm of the eternal."

The first time I read this, the ending was definitely a surprise to me. I didn't see it coming, not by a long shot, but now that I'm re-reading it, I can pick up on certain clues about it. All I can say is that the ending events of this book sets up perfectly a small crisis, throwing everyone and everything into confusion, Percy especially. Just when you think you know what's going on...guess again! Fast paced and filled with action, this book is no bit lacking from the first book!