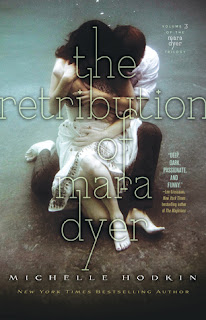 Book: The Retribution of Mara Dyer


A dark finish to a haunting series!

This book picks off a week or so from the events of the last book. Mara and her friends are still in Horizons' facility, but rather as guests, they are being held prisoner against their wills, be subjected to "medical treatments" (see: drugging and experimenting). This book follows Mara as she struggles for freedom, as well as to fight off whatever Horizons has done to her.


Mara's mindset was definitely a slippery one. Her thoughts are much more dark in this book as she comes to accept who she is, embracing it fully. Her actions are much darker and more extreme in this book, and you really get the sense that she's walking a fine line between dealing the best she can and becoming a merciless killer. Her struggle to hold onto her conscience and morals made the book gripping, as there are so many different outcomes to situations. Does she listen to her conscience or not? Sometimes she does, sometimes she doesn't. It's not linear relationship, which makes her both unexpected and frightening. Mara's character arc isn't about accepting who you are and learning to control it; it's about accepting who you are, and looking life straight in the eye and telling the world they better make way for you, because you not going to deny who you truly are anymore. Mara doesn't have to find redemption; she doesn't need it.


I was generally surprised to find Noah's point of view in this book. However, it didn't appear until a good chuck of the book, and though was odd, let me start to question his motives. But Noah's perspective really gave the sense that it's not just Mara who is unstable, but it's his too. I think it really humanizes him, as there's no way he's walking around unscratched and not mentally feeling the effects of everything that has happened.

Jamie and Stella played good foils to Mara. Stella was the complete opposite of Mara, motivation-wise. Yes, she wants answers, but she has a line she will not cross (i.e. murder). Stella does have a punishing bone in her, which really emphasized Mara's slightly murderous mindset. Jamie was the in-between of Stella and Mara. He wasn't on the pro-life-for-everyone side, but he wasn't an extremist either.


The ending didn't quite meet my expectations, as it was open ended, but I still think it was fitting for their characters. A completely happy ending doesn't really fit in with the overall atmosphere of the series, after all. It's a little open ended, and it leaves us off with the hope that things can get better. But what I liked was that it brought us full circle, back to the very first lines of the first book.

This book is eerie, events I'd never want to be caught in. Razors, scalpels, a warehouse of mannequins, altered memories, experiments, things inside someone... This definitely scores all areas for being a creepy, dark, and haunting. Perfect to read right before Halloween...