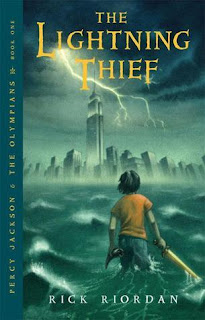 Favourite line: "Even strength has to bow to wisdom sometimes."

Absolutely perfect. I've read this book so many times, and it's easily one of the best books out there. I am never disappointed by this series!
Percy Jackson is your average trouble-maker student. Well, sort of. Bad things have a tendency to just happen to him, and no matter what, he always gets the blame. Until one day, he finds out that he's actually a demigod--the son of a god and a mortal--and not just the son of any god, but of Poseidon, one of the most powerful gods of Olympus. And now someone is trying to frame Percy for a crime he didn't commit, and he has ten days to set things right before the gods declare an all-out war on each other and start World War III...


Percy definitely is at my top for being a good guy. Even before he discovered he was a demigod, he was always standing up for the weak, getting into fights on their behalf. Yes, it got him expelled from schools more often than not, but immediately it set his character up as a strong, willingly defiant character who will fight tooth and bone for what's right. Put a sword in his hands, send him on a quest, and he becomes an even better person, someone on the start of becoming a truly great hero. His loyalty to his mother is a driving force for his quest at the beginning, but along the way, he begins to see that preventing a war is more important that saving his mother. It's no easy decision, but it shows that Percy is not narrow-minded, completely focused on his own mother, and instead is able to look at the bigger picture, and do good for the greater good. That's a real hero: someone who is able to sacrifice their own selfishness for the greater good, no matter how painful it may be.

Annabeth has always been another one of my favourite characters. As Athena's daughter, she is level-headed, and always has a plan. She dreams of being a great architect, wanting to design and build amazing structures and monuments. But by being a demigod, she has a much higher chance of getting killed. Annabeth begins the story off as someone eager to get out into the world, to go on a quest and do something with all her years and years of training. Though she does get her wish, we begin to understand through Annabeth that there might be something a little bigger, a little eviler, that's going on behind the scenes. Her character foreshadows events to come, and whether or not her suspicions are correct, we know something else is out there.


One of reasons why I love this series is the humour, and the modern references. There are many modern-day references in this book, which lets us connect to the world, and ultimately, to the characters. Things like pay raises, Italian suits, video games, fast food, bus rides, and so many more. It really gives readers the sense that quests like these really do take place, just outside our knowledge. Another thing I love is that the author comes up with the most ridiculous and snarky lines, which had be laughing to no ends. For example:

I don't know why, but that quote never gets old to me. I can never help but laugh at the absurdity of the situation! Another awesome element of humour to the book would be the chapter titles, in which they are both snarky and hilarious like "I Accidentally Vaporize My Pre-Algebra Teacher," "I Become Supreme Lord of the Bathroom," and "We Take A Zebra to Vegas" just to name a few! The double meanings are absolutely brilliant!


The plot of this novel was fast-paced and gripping, and is filled with information on Greek mythology. It's not overwhelming in any way; rather, it's the complete opposite, making you want to know more about certain myths. Everything is portrayed in a modern context, and is hilarious and entertaining to read about. There are twists and turns in the plot, and the characters were extremely relatable. It's easy to fall in love with the characters, to be cheering for them the entire time!


This book is fantasy weaved right into reality, and is a true masterpiece. Young or old, I'd recommend this series to anyone! 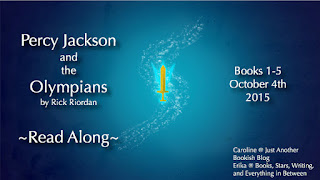 Don't forget to join in on the rest of our reread! :)