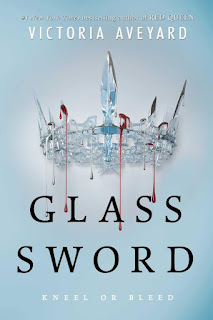 
If there’s one thing Mare Barrow knows, it’s that she’s different.
Mare Barrow’s blood is red—the color of common folk—but her Silver ability, the power to control lightning, has turned her into a weapon that the royal court tries to control.
The crown calls her an impossibility, a fake, but as she makes her escape from Maven, the prince—the friend—who betrayed her, Mare uncovers something startling: she is not the only one of her kind.
Pursued by Maven, now a vindictive king, Mare sets out to find and recruit other Red-and-Silver fighters to join in the struggle against her oppressors.
But Mare finds herself on a deadly path, at risk of becoming exactly the kind of monster she is trying to defeat.
Will she shatter under the weight of the lives that are the cost of rebellion? Or have treachery and betrayal hardened her forever?
The electrifying next installment in the Red Queen series escalates the struggle between the growing rebel army and the blood-segregated world they’ve always known—and pits Mare against the darkness that has grown in her soul.

This book is a whirlwind of emotions from the first word right to the last word.

This book doesn't give anyone a chance to breathe, picking up literally moments after the ending to the first book. Mare and Cal have escaped with the Scarlet Guard, Maven is hot on their heels, and everything is a mess. All of Mare's plans she made with the Scarlet Guard are being used against them with Maven's betrayal, including the important list of Red-and-Silver hybrids, like herself. Not only is it a race against time to find them before Maven does, but Mare now finds herself weaving through another game of lies and betrayal in a power struggle within the Scarlet Guard rebellion itself...

Mare has progressed to being a completely different girl since the first books, and her progression doesn't halt in this book. After using and being used herself, she's come to accept the fact that if she's going to win, she's going to have to expertly use others, regardless of the cost. But that's the thing about her in this book: she's suffering the consequences of not caring about the cost, paying it in blood and mental devastation. Her mindset completely shatters in the dangerous game of lies and trust, and I could really feel the agony of making tough decisions, of trying to do what's right regardless of the implications. At points it drove me a little crazy, because she knowingly made selfish decisions for the good of her own mission. But it's more than clear that Mare's losing herself, and that's she's struggling to not become like Elara and the other manipulative Silvers.


"I am a weapon made of flesh, a sword covered in skin. I was born to kill a king, to end a reign of terror before it can truly begin. Fire and lighting raised Maven up, and fire and lightning will bring him down."


Cal is definitely my favourite character in this book. After going through so much trauma and loss from the last book, he's just as lost as the rest of them, if not more so. But he took everything in with a clear head, never once faltering in his decision. He constantly was Mare's rock, putting things back in perspective of the big picture. Cal was a constant reminder of what true good is, ethically. He was the one person I knew I could trust wholeheartedly, the one without a hidden agenda, no secret cruel side. Everything was so easy to understand with him, a breath of fresh air in the web of lies and deception, and a firm reminder that people can be inherently good. I would have liked to see a bit more Cal, mainly because he really put everything back into perspective for doing what's generally good and right, not just want needs to be done.

Maven. I wasn't as gutted by Maven's betrayal in Red Queen as some other people. Yes, I was devastated, but the whole setup of a court filled with lies and deceit softened the blow. However, when Mare recounted Maven's betrayal in the beginning of Glass Sword, I found myself reliving his betrayal and, this time, I took it very personally. I wanted him dead. Correction: I still want him dead. But I am absolutely intrigued by his character, as twisted and creepy as he is. I love his character, love the loathing emotions he draws out of me, the sense of glee I get for hating him. I think I need help. I love and hate him, for everything he's done, for everything he was.

The side characters were well developed, with each going through their own growth and battles. There was a lot of Farley and Kilorn, and you really got to see where they stand, and how they operate. We also get a new cast of characters, with a new range of abilities to read about. The one who holds most interest to me is Cameron, for obvious reasons. I definitely wouldn't mind reading a novella about her. Also, *SPOILER* Shade dies!? But if I'm going to be honest, I saw it coming. He represented absolute hope and light for Mare, and of course, like any good plot, Mare had that taken away from her. That didn't make his death an easier though. And it's definitely going to haunt Mare for a long, long time. *END OF SPOILER*

With still another 3 books to go, I can't help but be on edge. I'm not set on trusting any of the new characters yet. I really want to, but as we're learned over and over again, anyone can betray anyone, and another 3 books provides ample time for alliances to be built, tested, and obliterated through betrayal. The world is also expanding quite a bit, as the Red-and-Silver hybrids are not confined to just Maven's kingdom. The introduction of new kingdoms definitely will bring even more trust issues, adding even more political schemes and power struggles. The world and plot is growing complex, bringing in new forms of manipulation and betrayal. This is just the start of a very large problem, and it's going to take a miracle for everyone to make it out alive and sane.

This book is filled with a ton of trust issues and tension. I don't really have the head for large-scale manipulation because it's way more angst than I can handle, but it was balanced nicely with action. Mare's fractured mindset became a bit much the last quarter of the book for me, but she managed to redeem herself, which of course led to that devastating ending. It's going to be interesting to see where the author takes the story, since she's opened up an entire world of politics, mind games, and devastation, and new powers...