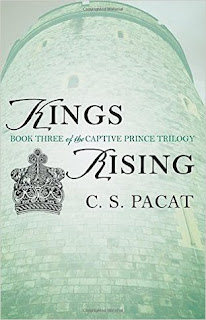 
Damianos of Akielos has returned.
His identity now revealed, Damen must face his master Prince Laurent as Damianos of Akielos, the man Laurent has sworn to kill.
On the brink of a momentous battle, the future of both their countries hangs in the balance. In the south, Kastor's forces are massing. In the north, the Regent's armies are mobilising for war. Damen's only hope of reclaiming his throne is to fight together with Laurent against their usurpers.
Forced into an uneasy alliance the two princes journey deep into Akielos, where they face their most dangerous opposition yet. But even if the fragile trust they have built survives the revelation of Damen's identity - can it stand against the Regent's final, deadly play for the throne?

With a title like that, you know this book is epic.

This is hands down my favourite book of the trilogy. Everything comes full circle, from the setting to the doubling of scenes to the resolution of conflict, both past and present. And, of course, I shipped Damen and Laurent like I've never shipped them before, because everything goes up another level.

This book picks up mere moments after the last book. Damen's identity as Damianos of Akielos, the murderer of Laurent's brother, has been revealed for all to see. But they both have a common enemy, and so long as the two rightful kings work together, they have a chance to reclaim their thrones and put an end to the Regent's scheming betrayals.

"I am Damianos, true son of Theomedes, and I have returned to fight for you as your King."


Restored as king, Damen finally could be who he truly was, no longer bound to Laurent as a slave. Damen finally was able to say what he wanted, discipline defective soldiers as he saw fit, and regain the rightful control and respect he deserved to have from the beginning. But after going through Vere, Damen didn't quite see everything exactly the same way. He constantly compared himself to his father, and how the old him would have followed in his father's brutal footsteps when it came to winning a war. But for the new Damen, after looking at Akielos from a Vereian perspective with Laurent, some of the Akielos customs don't quite sit as well as they used to with him. Though Damen struggled to change, and ultimately change the mindsets of his fellow Akielos, he did it without once losing his temper. And, surprisingly, Laurent aided him in all those brilliant ways Laurent only knows how, which of course made everything better. Damen was put to test when he found himself in the direct line of the Regent's attack, facing him politically and undergoing exactly what Laurent has gone through all these years. And though Damen's strength lies in commanding armies and being headstrong, he does learn take a page out of Laurent's book to face the Regent. Of course, nothing can ever beat Laurent's brilliant mind and planning, but Damen's strength and courage mark him with all the undeniably rightful qualities of a good king.

"I am going to take back the provinces of Akielos one by one, and when I march into Ios, I will make him pay for what he has done."


Laurent has come so far in these three books, and I am proud to say that I am officially 100% behind him. He was absolutely amazing in this book; not only did he remain to be his calculating and brilliant self in political tactics, but we also got to see a completely new side of him. A supportive, protective and kind side, one that made me ship him and Damen more than ever. His cold demeanour came right off for Damen, no longer holding him as a slave or treating him as a slave. There is evidence that Laurent cares deeply for Damen, evidence that isn't just obscure, but is completely out in the open for all to see. Laurent really loosened up, and it made him awkwardly adorable in numerous moments. He has a shy, almost boyish side, one that only Damen brought out, and their exchanges at those moments were hilarious and adorable to read about. His relationship with Damen was not longer one of master and slave, but rather as equals, and Laurent was more than fine with it. Laurent also grew a lot in this book, fearlessly taking on his uncle with his own terms. The final confrontation was enough to make me want to cry for what Laurent did. Like with Damen, Laurent took a page of out Damen's book and did some things that weren't normal for him to do, like being reckless or publicly putting others before him. All I know is that gone is the sadist, venom-mouthed prince, and here is the brilliant, protective and dear prince now worthy of ruling his kingdom.


"If you need an army to take your capital," said Laurent, "I seem to have one."

With Damen's identity revealed, both Akielos and Vere would most definitely have an issue with Damen and Laurent being in a relationship. However, the two of them were able to defy the odds and continue to pursue their impossible romance, only that they used slightly different tactics to continue to win each other over. All I'm going to say is that they took "forbidden relationship" to a whole new level. Those two played their exterior roles ridiculously well, and the spare moments of privacy made up for everything they had gone through. And whereas in the last book I felt a bit like Damen's affections were slightly one-sided, we get to see in this one both Laurent and Damen equally having a stake in their relationship. My favourite part? Definitely had to be when Laurent did something reckless to save Damen, and then Damen did something equally as reckless to save Laurent. They keep risking their own lives for each other, and keep getting upset when the other does it, and I just can't get over how adorable they are!

The plot was full of unexpected twists and turns, with new people and new revelations being made left and right. How easily things came, changing the course of the plot completely. This book was far from predictable, from the way Laurent managed to gain the loyalty of the Akielos to the ploys the Regent used against them, to the people who stood in defiance against the alliance between Akielos and Vere. It was so good!

All the ploys were perfectly executed, really grating on Damen and Laurent's nerves and mental mindsets. I really felt for their challenge of facing the Regent, because he's been brutalizing Laurent's reputation, and switches targets to Damen in this book. But standing together, Akielos and Vere as one, Damen and Laurent made for an absolutely invincible team, both pulling devastation and other tricks from their sleeves to keep themselves and their mission going. Where on earth would they be without each other?

"Damen spent two fruitless hours with Nikandros trying to plot a course that could sneak two wagons across the border without alerting patrols, and another fruitless hour alone staring at the map, until Laurent wandered in and outlined a plan so outrageous that Damen had said yes"

The ending was absolutely perfect. I could not have asked for a better resolution. Everything came together, even through devastation and betrayal. I particularly liked how there was a coming of full circle, with the past being confronted and made into the present as a means to put a final end to everything. And the feels you'll get from the ending! I read it five times the first time, that's how good it was. And it's not just exclusively Damen or Laurent at the climax; it's both of them, both working together, both able to overcome the obstacles set before them in all ways. It was so beautifully done, and truly is an ending I won't forget for years to come.


"We are the Kings of Akielos and Vere. We will keep our state, and come to him in Ios when we ride in at the head of armies. He faces Vere and Akielos united. And he will fall to our might."

I'm not ready to leave these characters. Damen and Laurent have come such a long way, worming their way in each other's lives and hearts, as well as mine. I never in a million years dreamed I would come to grow so attached to Laurent and Damen after I read the first book, but they are definitely making my OTP list of the year. These two, their story and progression, will forever hold a dear place in my heart.