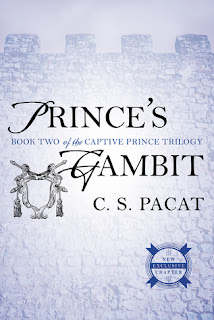 
The second novel in the critically acclaimed trilogy from global phenomenon C. S. Pacat—with an all-new chapter exclusive to the print edition.
With their countries on the brink of war, Damen and his new master, Prince Laurent, must exchange the intrigues of the palace for the sweeping might of the battlefield as they travel to the border to avert a lethal plot.
Forced to hide his identity, Damen finds himself increasingly drawn to the dangerous, charismatic Laurent. But as the fledgling trust between the two men deepens, the truth of secrets from both their pasts is poised to deal them the crowning death blow…

Wow. This book made up for everything it lacked in the last book!

We've moved away from courtly politics towards military and war tactics, and is the change ever nice! Replacing a court of poison and deadly lies is now a completely different setting, one of military strength and brotherhood. Everything was upped, from the character development to the stakes to the action to the romance!

The book begins following right on the footsteps of Laurent and his journey as he travels towards the border of Vere and Akielos, completely aware that his uncle has sent him there to be die. With them is Damen, who's stake lies both in Laurent's wellbeing as well as aiding Laurent to prevent war from breaking out. He has yet to reveal his identity as Damianos, rightful king to Akielos, the man Laurent hates more than anyone for killing his brother. Laurent needs Damen, because Damen's knowledge of warfare is what will lead Laurent to victory against his uncle...

Damen went above and beyond his role in this book. In the last book, we got to see him put his people before himself and his escape from Vere, ultimately showing his worth as a king, personality-wise. In this novel, we get to see another side of him that makes him worthy of the crown: his flawless war tactics. Time and time again he aids Laurent, and with Damen's help, they are able to either overtake the forces Laurent's uncle has deployed to kill them, or avoid them completely. Damen is a true general, completely calm under stress, helping lead Laurent and his men to victory. Absolutely worthy of a king!

In the last book, I wasn't much of a fan of Laurent. He came off as an extremely pompous and sly character, childish in spite and a tad psychotic. In this novel, Laurent completely changes. His attitude towards his situation, and especially his treatment towards Damen, shifts. Gone is the man who found himself in the middle of political ploys and schemes, constantly guarding his words. Now, he literally has to be on physical guard, lest he and his men get killed. Laurent's cunning brilliance was put on in full display, always having some kind of unexpected pre-arranged plan for tricky situations. Yes, it took Damen off guard numerous times, but it was brilliantly executed, especially since Laurent had everything planned out from the start. It didn't take long for me to become a full supporter of Laurent, both because of no matter how horrible a situation his uncle threw at him, Laurent was able to brilliantly think his way out, and because Laurent finally became human. He respected people (Damen in particular, and highly valued his input), did what was right, and tried his absolute hardest to thwart his uncles plans by staying alive and preventing war. We finally get to know Laurent underneath his mask of disdain, his motives, his fears, and his heart.

We finally have romance going on! I didn't quite ship Damen and Laurent in the last book just because of how awful Laurent treated Damen, but in this book, everything went up a notch. Laurent came to value Damen for more than just his slave, and in return, Damen constantly worried over Laurent doing something stupid and tried his best to protect him. I am so glad they've start to work together, because they make an absolutely unbeatable team and an equally amazing ship. And boy are there lines and scenes where I can ship them properly!


"That man had laid hands on Laurent, and Damen was going to kill him."


War, adventure, action, chases, betrayal, everything is in this book. We get to see both the political side of war with Laurent's brilliant thinking, as well as the actual battle tactics with Damen's commander knowledge. There is just so much more to everything in this book, more depth, more actions, more comprehension over the situation, more romance, more trust, more brotherhood in war, everything. This book outshines the first book in every way, and I cannot wait to read the next one!