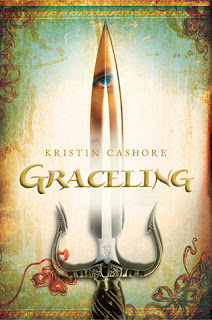 
Katsa has been able to kill a man with her bare hands since she was eight - she's a Graceling, one of the rare people in her land born with an extreme skill. As niece of the king, she should be able to live a life of privilege, but Graced as she is with killing, she is forced to work as the king's thug.
When she first meets Prince Po, Graced with combat skills, Katsa has no hint of how her life is about to change.
She never expects to become Po's friend.
She never expects to learn a new truth about her own Grace - or about a terrible secret that lies hidden far away...

Allow me to be the first to shamefully admit that though I have come across this book and series numerous times, even skimmed through it in bookstores, I never felt the burning desire to read it.

In an absolutely unbelievable whirlwind of emotions, I have reached the conclusion that I have been a naive fool. I am in complete awe of Cashore's book. I wasn't even 100 pages in, and already I dreaded reaching the end and saying goodbye to Katsa and Po.

Words fail to describe how amazing Katsa was. She's the girl I've dreamed of being, struggling with issues every girl in her position would be. I absolutely loved how strong she was, and how she learned to stand for herself, that she has the power both over her abilities and over herself. No king can hold her. Her fear of a domestic life really put into perspective how sexist a society we, and Katsa, live in, and how she absolutely refused to bow down to it. Katsa feared being tied down to a man, to forever live in his shadow and be bound to his name, and having her identity and freedom stripped away. She wan't cocky over her fear of being dependent or having her freedom stripped away; it was a genuine fear, as it literally threatened her identity. Katsa was also able to make the do the hard things, and though it did take some prodding to do it, she still did what she had to. Everything she did, she absolutely triumphed through intellect, combat, and perseverance. I kept waiting for her to stumble, but not once did she!

"She wouldn't hurt you," Giddon said. "Do you understand? But if someone were to hurt you, Lady Katsa would likely hurt that person."

Prince Po captured my interest right from the start. An exceptional fighter, he proved time and time again that he was ever bit Katsa equal. He brought home the difference between being humbled rather than humiliated by a girl with far superior skills than a man. He accepted Katsa completely who she was, a fighter rather than a "proper" court lady, and never once pushed her for anything other than their own survival and for Katsa to learn that she is powerful. Katsa to him was a comrade, someone he knew would have his back, as he would have his. Po's personality and desires were so far from what I expected of a prince; he didn't want power, didn't want the throne, didn't want to be forced to be involved in political schemes. He simply wanted to live, and that fit right well with Katsa's personality. He was his own unique character, constantly growing, risking his own life and reputation to do what is right. His loyalty to family was truly admirable in every way. I wish I had him as a relative!


"Katsa," he said. "Listen to me. You're the most powerful person I've ever met. You can do whatever you want, whatever you want in the world. No one can make you do anything, and your uncle can't touch you. The instant you walk into his presence, you have all the power. If you wish not to hurt him, Katsa, then you have only to choose not to."

The world of the Graceling was perfectly built. From the luscious descriptions of Liend to the horrendous and dangerous mountains, the author perfectly captured the essence of both the best and the worst parts of the seven kingdoms. The societies within the kingdoms themselves were similarly well constructed, politics and other royal intentions laid bare for us to explore. The world building was just phenomenal!

The character dynamics between Katsa and Po never once got boring. Both Graced fighters, they literally were an unstoppable team, but they never let their physical abilities hinder their judgement. It's not their abilities that carried them through their journey, but their intellect and overall strength of their hearts. They didn't need to rely on their fighting strength to get information; rather, they relied on other things, and most especially, on each other.

The plot of this book was full of unsuspecting deviations and revelations, the pace fast with adventure and action. Adversary came from natural elements, soldiers, other kingdoms, and other Graces, making this one heck of an journey for both Katsa and me. I totally would recommend this book to anyone who wants a little more kickass heroines in their lives, who don't bow down to the whims of others, and stand completely strong by themselves!