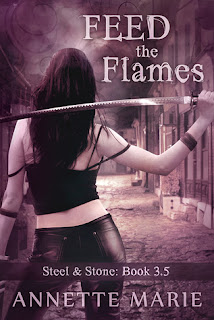 
In this short story addition to the Steel & Stone series, discover the fate of Seiya and Lyre following the conclusion of YIELD THE NIGHT (Steel & Stone #3).
Seiya wants nothing more than to disappear with her brother, safe from all the enemies that would tear them apart. But now she, along with Lyre, has been taken prisoner. Separated from Ash, his fate unknown, and tormented by memories of her imprisonment in Asphodel, she must put her faith in Lyre and his carefully guarded secrets. To have any chance of escape, they’ll have to work together to find a way out before they learn what fate their captors are planning for them.


This is a short novella happening between Yield the Night and Reap the Shadows, confirming Piper's suspicion that Seiya and Lyre have in fact been taken prisoner after Miysis's betrayal.

After Yield the Night, I wasn't left with the best impression of Seiya. I understood where she was coming from, but her open hatred of Piper really made me want to smack her a few times.

This novel really focused on Seiya and Lyre's grudging relationship, as they worked together to try to escape prison. But though Seiya is the protagonist, Lyre is by far the most interesting character of the two, and the star of the novel. It's Lyre who's able to get Seiya to take a step back and think about her actions towards Piper, his words causing her to see things from another perspective. Lyre has stuck with Ash and Piper since the beginning, and he knows exactly what Seiya is doing is childish, even if it is legitimate in her mind. He forces her to think, to reflect, and ultimately, to strive to be better than who she is.


"You're right, because if not for her, Ash would be dead and you'd still be in Asphodel, pregnant with the next generation of Samael's slaves."

The mystery of Lyre himself starts to unravel a bit. Up until now, no one really ever questioned just why Lyre was hanging around Piper, or more specifically, Ash. Why was it that a powerful draconian like Ash had a incubus like Lyre as one of his closest friends? Just what was Lyre's stake in everything, apart from being Piper's friend? We get a bit of Lyre's background, just a crack at how dangerous and complex of a life he's running from. It's by no means as bad as Ash and Seiya, but from what you gather, it's not much better. Similarly, we also get to see a bit underneath his charming exterior, see just who he is as a daemon, see that he is powerful. Not a brute or physical power, but Lyre actually is hiding a clever, cunning, and defiant self underneath, an ability that, as Seiya notes, most daemons would kill for. I really want to know what he's hiding, want to know his backstory, everything!

Since the beginning, I really liked Lyre, but I could never fully appreciate him or love him due to the fact Ash continuously stole the show and my heart. But here, without Ash, I could finally take a step back and just love Lyre wholeheartedly, no Ash as a distraction. Lyre literally ticks off all my boyfriend requirements: loyal, funny, self-sacrificing, powerful, and unexpected. He is just as great at stealing my heart as Ash is, just more subtle about it. I love Lyre very dearly, and I truly would love to see him with a book of him own. If only there wasn't Ash to compare him to!

The ending of this promises a change in Seiya, one for the better. It's devastating for sure, and the stakes are definitely rising for everyone. I really need to get my hands on the next book, because I absolutely can't wait to read about what happens!


"But Lyre had been right: her bond with Ash wasn't the only thing that mattered in the world. Other people mattered. Lyre mattered. As much as she wanted to run straight back to Ash and make sure he was alive and unhurt, she couldn't do that. She couldn't be that selfish."