I live at the castle.
But I'm not a member of the court.
I'm the executioner.

I was chosen by the Gods.
To be a Goddess embodied.
To serve the Queen.

No one will come near me.
My skin is poisonous.
My touch fatal.

My name is Twylla. 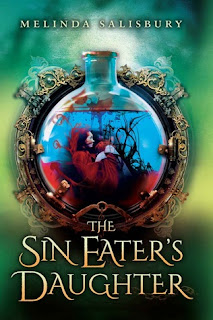 Blurb (Goodreads)
I am the perfect weapon.I kill with a single touch.Twylla is blessed. The Gods have chosen her to marry a prince, and rule the kingdom. But the favour of the Gods has it's price. A deadly poison infuses her skin. Those who anger the queen must die under Twylla's fatal touch.Only Lief, an outspoken new guard, can see past Twylla's chilling role to the girls she truly is.Yet in a court as dangerous and the queen's, some truths should not be told...

I've had my eye on this book for some time, mainly because of it's cover. That, plus it's a fantasy novel, which is an instant plus for me.

This book tells the tale of Twylla, who is the Goddess Daunen Embodied. She was taken to the court upon her discovery, and since then has lived as the Queen's executioner. All Twylla must do is touch someone, and they die immediately from the poison on her skin. Because of that, she lives a vey isolated and secluded life, away from people who cringe in fear of her.

Right off the bat, we're introduced to the devastation Twylla feels upon killing someone. She takes no joy in it, but does it else the queen will punish her family by withholding money. Nearly as quickly, we get to see the vile and cruel ways of the queen, how she is quick to accuse people of treason. She is powerful, and does not let anyone forget it.

Enter Twylla's newest guard, Lief. He's charming, extremely good with a sword, and for once is not afraid to get close to Twylla, both physically and relationship-wise. I fell for him just as Twylla did. I mean, who wouldn't want a guard like him as a friend? Add that he's charming and easy on the eyes, and lo and behold, Lief becomes my next fictional boyfriend.

Apart from Lief, we find that Twylla is betrothed to the prince, Merek. At first, I was wary of Merek, knowing that this was probably going to be a love-triangle. But as I got to know Merek, I found it hard to merely dislike him. He carries a lot of burden on his shoulders, and sees the evilness that his mother, the queen, spreads. Merek's actions are honourable and just; they are for his kingdom, for his people, and I can appreciate it...to the extent where Lief pales in comparison. Though both boys have valid reasons for wanting Twylla, Lief's reasons are merely for his own, whereas Merek's is also for order and rightness of the kingdom. Which leaves me very confused as to who to root for, because though Lief is the obvious choice, I can't help but feel that Merek deserves a chance...

Overall, I enjoyed this book a lot! Though there were some parts in the story that were predictable, the overall plot was anything but. So many new revelations, so many WHATs! I can't wait to read the new book, though it probably won't come out until next year...

Given that this is a fantasy novel, I wholly believed the fact that Twylla was the Daunen Embodied. It never crossed my mind that it would be a world filled with logic, similar to ours, and thus is completely illogical. Modern-day logic brought into a fantasy novel? Did not see that one coming, either. It was quite a surprise to find out that the king and queen were claiming their beliefs of the gods as a means to keep their kingdom happy. It works very effectively, I might add. I was a lot more open tot he possibility of magic, but that backfired on me, and thus brought the plot along to new and unexpected places.

I find Merek to be a generally good guy. He fears for his kingdom, fears for himself, at the hands of him mother, the queen. He's not one of those sit-by-and-do-nothing kind of guys; he's actively thinking up ways to battle this, to change his kingdom for the better. And it all must begin with overthrowing his corrupted mother. He also likes Twylla, and tells her that though their marriage is forced, he actually likes her and would have chosen her to be his bride even if he wasn't forced to. He values Twylla for who she is, and sees that she is necessary for their upcoming confrontation with the Sleeping Prince.

When I found out that Lief had been spying on Twylla, actually working for the queen, I was devastated. He lied to her. And he didn't beg forgiveness when he initially explained it. It was only after Twylla returned that he told her that he was actually in love with her, that he was sorry and would do anything to fix it. I had pinned Lief as possibly a spy from Tregellan, maybe trying to stir an uprising of sorts, but not someone who worked for the queen. Though I knew something was going to come to break Lief and Twylla apart, I honestly didn't see that.

I liked the idea of the Sleeping Prince fairytale, along with the Bringer. It has a few echoes of the story of the Pied Piper, which I particularly liked. Bringing the fairytale to life gives back the element of magic that the story lost upon the revelation that there was nothing supernatural with Twylla, and gives back the fantasy element to it.

I really don't know what to think about the love triangle. I know some people don't really see it as a love triangle, because clearly Lief loves Twylla a lot more. We didn't get see any chemistry between Twylla and Merek, but I can't help feeling that choosing Merek is the right thing to do in the grand scheme of things. And with the Sleeping Prince on his way, Merek is going to seriously need all the help he can get. But at the same time, Twylla and Lief are perfect for each other, and I was completely rooting for them all the way until Merek explained his plans to Twylla near the end. Way to throw in a curve ball! I was so set on Lief being the right choice. Lief represents love, Merek represents kingdom. What on earth is Twylla supposed to do? I don't even know myself, and I have no idea what I would do in her situation! This has the be the first love triangle that I honestly don't know who I ship, because I like the idea with Twylla both...

Have you guys read this book? Am I reading into Merek too much, and missing the obvious fact that she should be with Lief? I don't disagree there, because I was Team Lief until the very end, but I just think Merek needs Twylla a little more than Lief does...
Posted by Erika at 6:27 PM