Do we all remember Victoria Aveyard's Red Queen series? Yes? Well, there the covers for the two new novellas are out!!! 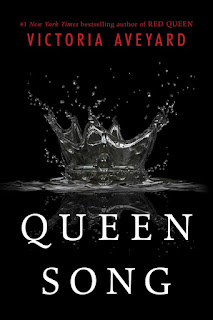 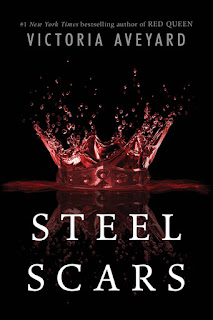 That's right! It's not just one, but two covers!

Queen Song is the prequel novella, about Queen Coriane, the first queen of King Tiberius. Needless to say, it's going to be an encounter of the events the transpired against her...

Steel Scars is the novella that fits right between Red Queen and Glass Sword. Book 1.5, of sorts. It features Farley, the leader of the Scarlet Guard, and her thoughts of Mare.

I'm really loving the two covers. We have a splash of silver blood on one, and red blood on the other. Plus, Victoria Aveyard's name is written in the opposite colour, reminding us that there are two blood types here, both silver and red... Add that black backdrop (which contrasts to the white/silver backdrops of the books in the series), and just WHOA. Plus, if you look closely enough, you can see the outlines of crowns in the splashes. Isn't that neat, or what?

Blurb of Queen Song: (Goodreads)
Queen Coriane, first wife of King Tiberias, keeps a secret diary—how else can she ensure that no one at the palace will use her thoughts against her? Coriane recounts her heady courtship with the crown prince, the birth of a new prince, Cal, and the potentially deadly challenges that lay ahead for her in royal life.

Blurb of Steel Scars: (Goodreads)
Farley was raised to be strong, but being tasked with planting the seeds of rebellion in Norta is a tougher job than expected. As she travels the land recruiting black market traders, smugglers, and extremists for her first attempt at an attack on the capital, she stumbles upon a connection that may prove to be the key to the entire operation—Mare Barrow.
* * *

Don't forget: The Dark Elements Series Re-Read is currently going on, hosted by me and Cody from Literary-ly Obsessed! It's not too late to join us, if you haven't already :) We're reading Stone Cold Touch this week, and be sure to check back for our discussions and Q&As on Monday, July 27th! More information HERE.**
Posted by Erika at 6:53 PM