Yes, that's right! Today is July 14th, 2015, which means that Cody and I are officially begining The Dark Elements series re-read!

If you don't know yet, this reread is being done in anticipation of the release of the Every Last Breath, the final book to Jennifer L. Armentrout's The Dark Elements series, on July 28th. With that, Cody from Literary-ly Obsessed and I have decided to host this re-read, and we will be doing fun discussions, Q&As, reviews, and a lot of fangirling for the duration of the next two weeks.

Today, we will be starting with the first book, White Hot Kiss. This is the book where the world was first introduced to Layla, Roth, and Zayne. Did I mention Roth? I'm sure I did. ROTH.

And just for clarification, in case you're new to the series: there are two official covers to White Hot Kiss. 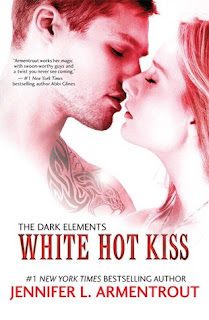 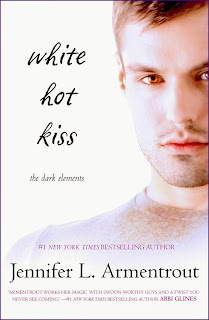 Basically, the series got new covers for the final book. The red one is the old one, and the white one is the new one. Though I don't think the new cover is actually out yet.

Either way, both contain the same story about angels, demons, gargoyles, regular humans, and a few exceptionally swoon-worthy guys. It's also contains action, snark, and humour. And I'm also pretty sure I mentioned Roth a while ago, but I'm going to mention him again. Roth is in it. Yes, I might be slightly biased. Regardless, you don't want to miss out on it!

What are you waiting for? Grab a copy of White Hot Kiss and join our re-read! Don't forget to check back next week for me and Cody's discussions, Q&A, and other fun stuff! Full schedule can be found here :)

Happy reading, and get your FEELS ready!

Blurb for White Hot Kiss:
One kiss could be the last.

Seventeen-year-old Layla just wants to be normal. But with a kiss that kills anything with a soul, she's anything but normal. Half demon, half gargoyle, Layla has abilities no one else possesses.

Raised among the Wardens—a race of gargoyles tasked with hunting demons and keeping humanity safe—Layla tries to fit in, but that means hiding her own dark side from those she loves the most. Especially Zayne, the swoon-worthy, incredibly gorgeous and completely off-limits Warden she's crushed on since forever.

Then she meets Roth—a tattooed, sinfully hot demon who claims to know all her secrets. Layla knows she should stay away, but she's not sure she wants to—especially when that whole no-kissing thing isn't an issue, considering Roth has no soul.

But when Layla discovers she's the reason for the violent demon uprising, trusting Roth could not only ruin her chances with Zayne… it could brand her a traitor to her family. Worse yet, it could become a one-way ticket to the end of the world.
Posted by Erika at 12:51 PM