So...the cover of The Immortal Heights, the last book in Sherry Thomas' The Elemental Trilogy, came out Feb. 17th and I DIDN'T KNOW ABOUT IT.

Unbelievable. But at least I found out before the one-month mark-later. Better late than never, right?

Without further ado...here it is! 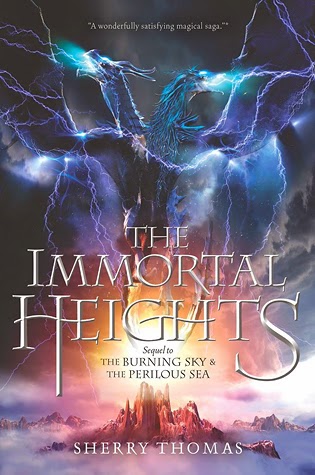 Am I the only one who sees that? Because LOOK AT IT.

There are freaking dragons on it. And that. Is. AWESOME.

1. DRAGONS DRAGONS DRAGONS. Did I ever mention the dragons? Though if you take a closer look, there seem to be two different dragons here...one actually looks a little furry. Like...a phoenix? Ha, that would be appropriate! It would be a combination of the two covers, with the phoenix and the dragon!
2. Electricity/Lightning. Because that just makes the cover electrifying (sorry, I couldn't resist making that joke). Even the dragons are breathing out electricity!
3. Sun. Notice how the dragons seem to be stemmed from the rising sun? And how the sun it right above the temple/city/castle thing? Yeah. Enough said.
4. Background. There are mountains in the background! And fog! And it's so pretty!!!
5. Wings. The dragon's wings? Don't they also seem like electricity to you? I think so. And I also think that it's a pretty cool idea!
6. Two heads. I'd like to think that they each represent Iolanthe and Titus. Because it's only right that they get a cover together.

This cover is totally appropriate for this series. Don't believe me? Take a look:

1. Those elements: Fire. Water. Electricity. Just...epic.
2. The colors: The red/orange. The green/blue. The blue/purple. Never have I seen such a beautiful merging.
3. Consistency: I love covers with consistency. And here, we have it. From the elemental beasts that takes up the top half of the cover, to the sun that all the creatures seem to stem from, to the city at the very bottom, to the distinct horizon in the distance. There's this sense of endless possibility, as well as hope. I love it. I love them.

Sadly, I have yet to read The Perilous Sea yet, but that is really high on my to-read list! The Burning Sky was absolutely one of my favorite books, so it goes without saying that the rest of the series will be fantastic too! To read my review on The Burning Sky, go here. These beauties will (hopefully) be finding a new home on my bookshelf very soon!

Sherry Thomas' The Immortal Heights comes out October 13th, 2015! Make sure you grab this book, because I will guarantee that this last instalment will be just as (or more!) awesome as it's fabulous cover!

In a pursuit that has spanned continents, Iolanthe, Titus, and their friends have always managed to remain one step ahead of the forces of Atlantis. But now the Bane, the monstrous tyrant who bestrides the entire mage world, has issued his ultimatum: Titus must hand over Iolanthe, or watch as his entire realm is destroyed in a deadly rampage. Running out of time and options, Iolanthe and Titus must act decisively to deliver a final blow to the Bane, ending his reign of terror for good.
However, getting to the Bane means accomplishing the impossible—finding a way to infiltrate his crypt in the deepest recesses of the most ferociously guarded fortress in Atlantis. And everything is only made more difficult when new prophecies come to light, foretelling a doomed effort....
Iolanthe and Titus will put their love and their lives on the line. But will it be enough?