There are two kinds of people in the world:

The Silvers have powers, elite warriors who rule.
The Reds are normal, commoners, forced to serve the Silvers.

I am a Red.
But I have powers.
Powers no Silver has ever seen.

My name is Mare Barrow. 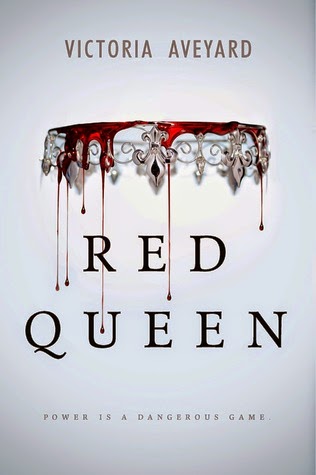 Hi guys! Today, I have the pleasure of being Mare, from Red Queen!

Reading: first time
Favourite line: "I have lived that life already, in the mud, in the shadows, in a cell, in a silk dress. I will never submit again. I will never stop fighting."
Rating: 4 stars

Funny story. I got up this morning, thought, hey, Red Queen! It's supposed to be good!, picked it up, and finished it less then 12 hours later. Which was very surprising, because I mainly only do that for heavily anticipated books that I've been dying to read (like sequels or the first book of a new series by my favourite authors). So this was new.

First off, I particularly liked the world the author built here. Yes, it's a dystopian and you have the whole rebellion-trying-to-overthrow-the-higher-class, but what really drew me to this book in the first place was the idea that people with different blood could have powers. It makes them alien, in a way. It's difficult to image people with silver blood, like how it's difficult to actually image an alien. But similarly, it's also easy to see these people with silver blood as a separate species themselves. So being a separate species, it's not too difficult to see them having powers.

What kind of powers, you ask? I'm talking about having super strength, controlling specific elements, mind control, turning invisible, you name it. But the catch here is that there's a set list of powers that exist, and you can't have one that's not on that list. That is, until Mare shows up.

Mare. Red blood, like you an me (I hope). Trying to protect her family, help in any way she can. Completely bewildered when she's swept off into a dangerous court game of pawns, marriages, etiquette, and power. Trying to do the right thing. Sometimes getting a little in over her head. But she's a quick thinker, and she's able to worm her way out of situations relatively quickly, which I like. I'm not quite sure how I myself would survive in her place, so I admire her for keeping her head (both figuratively and literally).

I never was a huge fan of dystopian, because it's generally all the same to me with the idea of a rebellion. This book didn't really offer any new spin to, but I wasn't really reading it for it's dystopian element. What I did like was this: there's a saying in the Silver court, which is "strength and power." And throughout the book, it evolves in "strength, power, and death." The evolution of the dystopian element through a saying was very effectively. It bluntly shows the increasing maliciousness of the ruling class. Funny that it doesn't catch on with the Reds, huh?

In this book, Mare is taken into the castle and stripped of her identity. She's "reborn" as a long-lost Silver princess in an attempt to cover up the fact that she's a Red. But Mare sort of hates Silvers, so it's not exactly an easy transition. But she doesn't exactly have much choice, as she needs to protect her family. And to protect her family, she must first protect herself, even if it is by going along with the king's orders. And thus the risky game of secrets within the palace begins...it's a place where everyone has secrets, where some, if revealed, have more dangerous potentials than others...

If you're looking for a book with a variety of awesome powers, tricky court negotiations/policies/lives, some (few, but) wicked bouts of action, and a ton of compelling trust and betrayal issues, pick up Red Queen. Believe me when I say that the action with Mare's power is something unique, so you don't want to miss out!

And the rest is going to be spoilers, so read until the cut.

Blurb:
Mare Barrow's world is divided by blood--those with common, Red blood serve the Silver- blooded elite, who are gifted with superhuman abilities. Mare is a Red, scraping by as a thief in a poor, rural village, until a twist of fate throws her in front of the Silver court. Before the king, princes, and all the nobles, she discovers she has an ability of her own.
To cover up this impossibility, the king forces her to play the role of a lost Silver princess and betroths her to one of his own sons. As Mare is drawn further into the Silver world, she risks everything and uses her new position to help the Scarlet Guard--a growing Red rebellion--even as her heart tugs her in an impossible direction. One wrong move can lead to her death, but in the dangerous game she plays, the only certainty is betrayal.

First off: PLOT TWIST. Holy, I did NOT see that coming. Maven? Mare trusted him. Heck, I trusted him. He was a good guy...or so I thought. Ugh, I want to kill him myself. And his mother, Elana. I kind of assumed that the real antagonist was Elana from the beginning, but I never saw the full extent. I figured that she was going to try to kill Mare or something. Never did I see her making Cal kill the king. That's evil. Evil! When you think about it, those two make a dangerous duo...

On the other hand, we have Mare's power. Electricity. Lightning! And it's described as purple-white sparks, growing until you get a streak of lightning. Purple lightning? Yes please. I think I would pay to see such a display of unique power. What I really loved apart from the obvious awesomeness of her power was Mare's ability to sense cameras. I know, that's weird of me, but think about it. That's super useful, especially if she's trying to sneak around, unnoticed. As for the obvious: blasting people with lightning? That's deadly. Lethal. And let's not forget that Mare has the ability to create electricity, not just manipulate whatever's already there like all the other elemental Silvers. She doesn't need to be surrounded by technology to use it's electricity. She can create it. And that is a power by itself.

But we know that Mare isn't the only one like this. Thanks to Julian, we all know that Mare is both Red and Silver, and stronger than both. Mare controls electricity. Shade can teleport(!!!). Unheard of to the Silvers. It's a "mutation," as Julian says, but when you think about it, it's probably something genetic. Both Mare and Shade have this mutation, so technically, wouldn't her other siblings have it too? Bree, Tawny, and Gisa? Just speculation here.

Either way, I can't wait to see what other powers the people with the Red/Silver mutation have! If you could choose your power, what would it be?
Posted by Erika at 11:27 PM