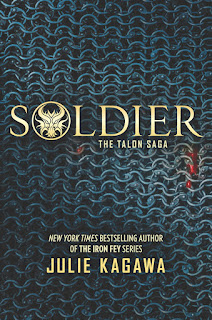 The price of freedom is everything.
When forced to choose between safety with the dragon organization Talon and being hunted forever as an outcast, Ember Hill chose to stand with Riley and his band of rogue dragons rather than become an assassin for Talon. She’s lost any contact with her twin brother, Dante, a Talon devotee, as well as Garret, the former-enemy soldier who challenged her beliefs about her human side.
As Ember and Riley hide and regroup to fight another day, Garret journeys alone to the United Kingdom, birthplace of the ancient and secret Order of St. George, to spy on his former brothers and uncover deadly and shocking secrets that will shake the foundations of dragons and dragonslayers alike and place them all in imminent danger as Talon’s new order rises.

That ending just ripped my heart into eighteen pieces. Eighteen. I don't think I'm okay with it.

Soldier picks up a bit after the ending of Rogue. Ember and Riley are moving as quickly as they can to save Riley's underground network of rescued hatchlings, while Garret has headed off on his own to London to find answers. And both will uncover secrets about the organizations Talon and the Order of St. George no one has ever dreamed of...

Ember Hill has been our fierce, stubborn, and defiant protagonist from day one. Now that she's fully integrated as a rogue, we got to see how she fit in, how she was adjusting to the new life. She went through a lot in this book, the physical battles and killing taking a definite physical and mental toll on her, and I could practically feeling her exhaustion as if it were my own. Ember also constantly faced the battle between her human side and her dragon side, with no clear answer of who she was supposed to be. I just felt like there could have been more Ember, that her character wasn't able to develop as much because of all the other POVs. I'm not complaining about the other POVs--they were great-- but I think it would have benefitted if the book had been a bit longer, for Ember to have been given the chance to fully explore what was going on. Then again, we still have another 2 books to go, so it's a logical reason to drag out her character arc a bit.


"More fighting. More killing. I was sick to death of it all. But I knew we had to succeed here, or even more of us could die."

Garret--Garret--definitely was the star of this book, and I could not be happier about it. We get a lot of contextual background information on him, and really get to see how he developed into the heartthrob he is today. Skilled, dangerous, all with a humble and noble and loyal personality befitting a true knight--how can you not love him? I mean, the lengths he goes to warn, protect, and rescue his friends was astonishing. He really had his eye on the bigger picture and was much more perspective than the others, and thus wasn't afraid of personal consequences, so long as his actions meant the start of ending the war. As noble and selfless as it was, it would have been very easy to label him as a martyr-in-waiting, but it was Ember that grounded him, made him selfish in the way that he didn't want to die just to make a statement. She made him want to fight for the cause, to realize his role wasn't solely stopping an impending war by any means, but to actually fight for himself, not just for the future of the world.


"But I would not break. I would not give up Ember's location, or Riley's underground. The next few hours might have me wishing I was dead, but I would not betray the girl I  loved to the organization. They would have to kill me."

And then we had Riley, aka Colbalt, our daring rogue dragon. He's definitely come a long way since the beginning of the first book. Gone is the bad boy; replaced is someone grim with determination to do whatever is necessary to save his network of rescued hatchlings. There isn't really much new about Riley, since we learned most about him in the last book. But his constant drive to see the goal of his mission completed really spoke of the dedication he had to protecting his hatchlings. If anyone's going to save me from an evil organization and protect me afterwards, I'd definitely want it to be Riley, because I know that he wouldn't give up on me!


"My network, my hatchlings and all the dragons I'd freed from the organization were counting on our success. I was Cobalt, leader of the rogue underground, and I could not let personal problems get in the way of the mission."

My absolutely favourite part? Jade. An Eastern dragon. As in, she's a traditional Asian dragon, not a Western version of a dragon. Coming from an Asian background myself, I really appreciated how Kagawa honoured that part of dragon mythology. Western dragons are by far extremely popular, but it's a nice reminder that they're not the only dragons in existence in the world. If you know the legends of Asian dragons, you'll know that they're difference than Western dragons in the sense that they can fly without wings, are extremely long with a flowing mane, and possess some serious powers over natural weather. I don't think I've read any book featuring both Western dragons and Asian dragons, let alone the Asian dragon being exceptionally more powerful than the Western ones (at least in this book, with the characters present). I'm definitely looking forward to (hopefully) seeing more Asian dragons in the next book!

This book was a bit slow to get into at the beginning, but it picked up very quickly afterwards. I expected it, since the team was separated. The action was down to an art, with your modern human gunfights, mythical dragon-verses-human fights of claws and steel, and traditional sword fights. As mentioned before, I liked the numerous POVs, as we got to see what was going on in everyone's head, and it was neat how we continued to glimpse Dante's descent into the darkest parts of Talon. However, I still think the book could have been a bit longer, just to properly flush out everyone's character a bit more extensively, Ember in particular.

The last 40 pages were the best, and made up for everything I was waiting for. Completely unexpected events that turned the plot on its head. And that ending absolutely gutted me. I mean, something very similar happened in Kagawa's other series, but at least in that one, there was forewarning (the characters were actually trying to stop it from happening). But in this one, I did not see that coming, and I honest to god do not know how it's going to play out in the next book. I mean, yes, there's an obvious answer to what's going to happen regarding said character, but at the same time, the consequences that will occur are completely unknown...

So until the next book comes out, you can find me curled up in a corner, silent crying over the ending. Worst. Cliffhanger. Ever. The worst kind, the one that makes you want to sell your soul to get your hands on the next book right now. How am I supposed to endure these emotions until next year? A year's wait is ridiculous, don't you agree!? Someone please send me help, because my feels are devastating...