United as One Review 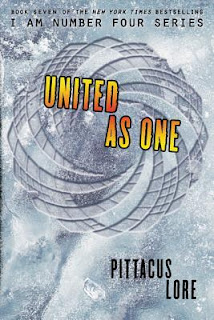 
The seventh and final book in the #1 New York Times bestselling I Am Number Four series! With United as One, this action-packed series comes to a surprising, breathtaking, and utterly satisfying conclusion. The Garde didn’t start this war, but they’ll do whatever it takes to end it once and for all. . . .
The Mogadorians have invaded Earth. Their warships loom over our most populated cities, and no country will risk taking them head on. The Garde are all that stand in the way, but they’ll need an army of their own to win this fight.
They’ve teamed up with the US military, but it might not be enough. The Garde need reinforcements, and they’ve found them in the most unexpected place. Teenagers from across the globe, like John Smith’s best friend, Sam, have developed abilities. So John and the others must get to them before the Mogs, because if they don’t their enemies will use these gifted teens for their own sinister plan.
But after all the Mogadorians have taken from John—his home, his family, his friends, and the person he loves most—he might not want to put any more lives in danger. He’s got nothing left to lose, and he’s just discovered he has been given an incredible new Legacy. Now he can turn himself into the ultimate weapon. So will he risk his life to save the world, or will he realize that power in numbers will save us all?

The end is here. End of the series, end of human ignorance of the Loric and Mogadorians's existence and secret war on Earth. And the world is suffering because of it.

Mogadorians have successfully invaded Earth, and their intentions of colonizing Earth through the destruction of human civilization have been made clear. The Garde--now both Loric and human--are all that remain to oppose the Mogadorians, but whereas the Loric Garde lack numbers, the human Garde lack experience, having literally been plucked into the battle within mere hours. John, aka Number Four, is the best hope the world has, and after losing everything, he might just be the one to stop Setrákus Ra, but at a high cost...

After that absolutely devastating ending in the last book, my heart was absolutely broken for John. I knew he wouldn't be the same person he was in the other books at the beginning of this book, and I was correct. John really stepped up further into the role of leader, leaving all personal matters behind. However, John was rather devoid of emotion, save for guilt, and I felt like he never truly found a way to heal. We touched a bit on John's psychological state, and how frazzled it was, but we never got to see him recover or come to terms with anything. He had a one-track mind to take down Setrákus Ra once and for all, but it felt more done out of necessity and not passion. But oh well. He's still grown so much, and he's had it the worst, so I forgive him.

"Look, there's nothing more I can say. We've come this far together, and we're going to get through this together. No more running, no more hiding, no more words. We fight until we win."

My favourite character had to be Six. Whereas John lacked emotion in his decisions, Six really made up for it. She was driven by emotion to stop Setrákus Ra, and everything she did really came from the heart. She held onto friendship while leading the others, and you could really feel her aliveness, how much she was reluctant to let the Mogadorians win. Six just felt the most human to me, with a fluctuation of emotions and concern for herself and for others. Plus she was as badass as ever, which made her all the better. I'm definitely going to miss Six the most.


"And if you think you're about to die, Sam, I want you to remember this moment. Remember that we're fighting for this, for the future. Our future."


I was very glad to have just John and Six's POVs. As much as I enjoyed reading everyone else's perspectives in the other books, there were just so many characters, and the number of perspectives kept changing per book. In this one, it was very clear that John and Six are the main heroes, that they were always the main heroes, that they are the strongest of the Garde.

The stakes were definitely upped with the introduction of the new human Garde, and the revelation of just what Setrákus Ra has been working on with his experiments. It kept the plot fast-paced and unpredictable. The final assault was everything I hoped for and more, involving air battles, major destruction, breaching of security, and unexpected enemies and fights at every turn. It was so easy to whip right through the last 150 pages, with everything going down, and your heart literally in your throat! There were just so many possibilities for people to die, and there was the constant worry of who would die, and how they would die, and what their death would initiate.

One of my favourite things about this was how the events have kind of come full circle with the Elders and with the remaining Loric Garde. With the new human Garde, the responsibility of keeping them safe fell on the Loric Garde's shoulders, as they're the ones who know how to use their legacies to fight and survive. And with the Mogadorians hunting down not only the Loric Garde but the human Garde, it's practically a repeat of what happened on Lorien, and how the Elders needed to go to extremes to keep them safe. I was a little disappointed that Pittacus Lore himself didn't make an appearance, and that his connection with John was fully exploited, but the Loric Garde still made the choice the Elders had to make.


"For now, I think the future protectors need protecting. We all had charms burned into our ankles that would keep us safe, at least for a time. We can't do that for you guys, but we can give you something else..."


All in all, an great conclusion to the series. I wouldn't trade the plot for the world, but there are some characters I would have liked to have developed differently. Regardless, all characters have undergone such dramatic transformation, and I hope they're all going to be happy. I'm going to miss some of them!