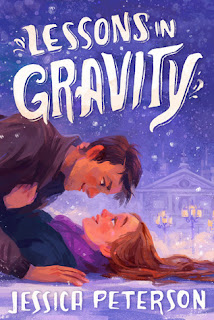 Source: ebook, author (thank you so much, Jessica!)

Maddie Lucas is only looking for a one night stand…
While studying in Spain for her semester abroad, Maddie hopes to escape the drama surrounding her parents’ divorce—a divorce she may or may not have caused—while researching Spanish architecture for her thesis. And if she hooks up with hot Madrileños along the way? All the better.
But handsome Spaniard Javier Montoya wants so much more.
Guitarist Javier is ready to set aside his rock star ways and settle down for good with his gorgeous ex-girlfriend. But after a one night stand with sexy, passionate Maddie blossoms into genuine friendship, he begins to wonder if Maddie might be the forever girl he’s looking for.
Too bad Maddie believes forever is more fiction than fairy tale. Can Javier prove to her that fairy tales exist? Or is Maddie right to think she doesn’t deserve happily ever after?
LESSONS IN GRAVITY is a New Adult romance, suitable for mature audiences.

This is an absolutely amazing follow-up to the last book!


Maddie Lucas is fortunate enough to spend an entire semester in Madrid, Spain, and she's determined to use the time there to both work on her thesis, and to forget about the terrible divorce she may or may not have caused between her parents. She's got a firm rule about one-night stands, until her meeting with Javier changes everything. Suddenly, she's forced to confront everything she's been running away from, and decide whether or not to stick to her one-night stand rules or let Javier into her life...

If you're read Spanish Lessons, you'll know that Maddie already went through some heartbreak beforehand. In the first book, she wasn't a very sympathetic character, and though I had nothing against her, I didn't have any strong emotions for her either. But in this novel, we finally get to see Maddie's side to it, and how she's just doing whatever she can to cope with her horrible situation.

Maddie's character was significantly stronger and more outspoken than Vivian's. Her personality really outshone Vivian's, and her journey was more emotional, filled with pain and aspects of self-forgiving. Maddie began the novel off in a really distraught place, harbouring devastation, guilt, and shame. Her immediate background wasn't a happy one; rather, everything went downhill in a very short amount of time prior to her time in Madrid. But as the story progressed, Maddie was able to come to terms with her situation, and come to terms with her actions. It's no secret that it's easy to lose or forget yourself and everything by living a very risqué lifestyle, but as Maddie learned, that isn't a substitute for healing. The constant sense of self-doubt on Maddie's mind made it very realistic, as these things, if unattended, can and will eat up your life. Similarly, her transition to healing was very emotional, and there are tons of times I just wanted to reach out and give her a hug.


"I'm done running because I deserve to love and be loved in return."


Javier. My god, Javier. He was absolutely perfect. He took both Maddie and me away by storm and fire. The number of times I just swooned...I fell hook, line, and sinker for him. A musician who's kind and is the perfect gentleman? Yes please! Javier couldn't have been more different than Maddie at the beginning of the book: he just returned to Madrid, was trying to be a newer, better version of himself, and wanted to settle down with someone. That someone happened to be with his ex, Maria Carmen. But his meeting with Maddie changed everything, and we got to see how conflicted he was over the two. It was entertaining to watch as he tried to justify why he should go back to Carman, yet always found his thoughts going back to Maddie. Javier's emotions jumps from certainty to uncertainty and back again as he continued meeting with Maddie, and it really captured how conflicted and messy relationships can be. But he always had a clear head, and the things he did to prove himself to Maddie was absolutely amazing in ways I can't explain!

I was a little concerned about Maria Carmen when I read the synopsis. Even before we met her, Javier's description left me feeling she would be a big threat to the budding romance between Javier and Maddie. However, the opposite turned out to be true, and I was extremely grateful for it. There are too many stories about the rival of the love interest being vicious, jealous, petty, or extremely possessive. Carmen was a complete breath of fresh air in the rival department. Yes, she had her own personal past and issues she was dealing with, trying to live up to expectations and such. But her sophistication extended beyond her looks, and she was very kind in the aftermath of Javier and Maddie's situation. None of her actions were done in spite; they were all general and sincere, and not once did she show any signs of harbouring ill will or revenge towards Maddie, or anyone for that matter. I definitely would like to see more side characters like her!

The main difference between the first and second book was the dual perspective, and I absolutely loved it. It really enhanced the story, adding new layers of depth and emotion to each situation. Maddie and Javier's narration complemented each other, and you could really see just how different or similar the other's thoughts were about situations. Not once did I ever get confused over the perspectives; they both had very distinct and unique voices, and you really got the sense of their own individual lives and directions they were coming from or going towards. The author does such an absolutely amazing job blending the two narrative together!

I definitely enjoyed this second instalment more than the first one. There's so much more going on behind the scenes, and we get to see Madrid from completely different perspectives. My favourite part had to be the emotional journey both Maddie and Javier go through, and how we get to see their two differing opinions. The angst between the definitely makes these two my favourite, just because of all the obstacles they both overcome to be together. Aerial views of Madrid, emotional turmoil, beautiful monasteries, music, steamy moments, swoon-worthy acts of kindness--what else could make this book more perfect?


"The losing gravity thing--oh my God, I loved it."


I definitely cannot wait for the next novel, and I can only guess at what the author has in store for the new set of protagonists, Laura and Rhys!