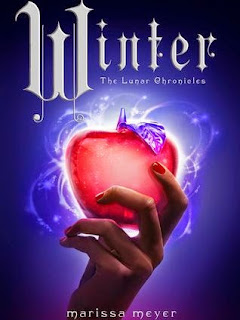 Princess Winter is admired by the Lunar people for her grace and kindness, and despite the scars that mar her face, her beauty is said to be even more breathtaking than that of her stepmother, Queen Levana.
Winter despises her stepmother, and knows Levana won’t approve of her feelings for her childhood friend—the handsome palace guard, Jacin. But Winter isn’t as weak as Levana believes her to be and she’s been undermining her stepmother’s wishes for years. Together with the cyborg mechanic, Cinder, and her allies, Winter might even have the power to launch a revolution and win a war that’s been raging for far too long.
Can Cinder, Scarlet, Cress, and Winter defeat Levana and find their happily ever afters?

This book is an absolutely phenomenal ending to the series! It may be 824 pages long, but believe me, it is still way too short. Everything about this book was perfect, from the characters to the world of Luna to the unpredictable plot to the humour to that amazing finale. It. Is. So. GOOD!

The book picks up right after the ending of Cress, and begins with the introduction to our newest heroine, Winter. As we're read about in the previous three books, Cinder plans to lead a revolution against Levana on Lunar, and she'd going to need all the help she can get. Everyone has a stake here: Cinder, Scarlet, Cress, and Winter, and they're going to need to work together to overthrow Levana.

Cinder. She's grown so much since the very first book, when she was just a mechanic who bumped into the young emperor disguised as a commoner. Her journey has been unpredictable event after unpredictable event, with new revelations of her identity. Her final character arc in this book has her fully embracing her identity of being cyborg, Lunar, and the rightful heir of the throne. She no longer hides who she is, and instead embraces it and uses it as a weapon. Does it work? Hell yes. With the unpredictable plot, Cinder's revolution constantly hit roadblock after roadblock, but Cinder proved to be extremely resourceful and always found a way to get herself and her friends back to on track with their mission. I really admire her ability to work with what she's got, to use bad situations as an opportunity to use them to her advantage.

"I understand that I am asking you to risk your lives. Levana's thaumaturges are powerful, her guards are skilled, her soldiers are brutal. But if we join together, we can be invincible."

When we last left on Cress, Kai's political life has been put on hold so that he could help Cinder. Though Kai is unable to get away from his emperor duties to physically fight alongside Cinder, he plays key roles working behind the scenes. Kai resumes the same struggles he had before, but this time, he has a hidden agenda he needs to carry out, and a determination that fuels him. The things Kai had to do were cringe-worthy, but he did them with grace and arguably is on par with the trauma everyone else faced.

"But I will not let that woman rule the Commonwealth. I would be honoured to die in the service of my country [...] Just as long as I can take her down with me."

Scarlet's character arc was static for this book, which was fine since we still had a lot of characters growing. However, her actions and personality remained to be just as fiery and determined as before, and I really like Scarlet in this book. Her personality really shone through in this book, and we get to see her as a physically and mentally strong character, willing to take on the world regardless of her own state. Her relationship with Wolf is off the charts in this book, and I read all their parts with a silly grin on my face.

"I already have an alpha male to satisfy all my needs, and he could slaughter any one of you."

Cress's character arc is more romantically driven than the others, which is fine given the events of the last book. She was absolutely adorable in all ways, yet remained to be a brilliant player in the game. She proves time and time again that she is not to be underestimated, and her ability to avoid being captured is amazing.

"And, can I make a suggestion? Because I've been listening to you talk and I have to wonder, if you're sure Levana is going to have you executed for failing to stop the video...have you considered joining the other side?"

Thorne was as cocky and hilarious as always. It was adorable seeing him trying to explain his feelings for Cress, and how he thought he was unworthy since he was criminal. But, as we all know, love knows no bounds, and I was pleased by how he and Cress figured things out. Thorne maintained a very much-needed air of confidence and casual optimism the entire time, easily laughing things off. However, though part of his charm is to not take anything seriously, we do get to see him reach a point where his uncaring facade cracks, which really humanizes him.

"We're going to overthrow Levana, and by the stars above, we are going to make Cinder a queen so she can pay us a lot of money from her royal coffers and we can all retire very rich and very alive, got it?"

Winter, our newest heroine was quite the interesting character. I had a feeling she would be  a lot more complex every since we saw her in Cress, and I wasn't disappointed. Winter was was very kind, but she also had her moments of...oddity. She was present, but not quite. Though she isn't physical enough to get directly involved with numerous missions and more than not plays the damsel in distress, she played an essential part to the revolution. Her self-preservation abilities made her a hard target to pin down by others, for better or worse. But what I really enjoyed was her relationship with Jacin. They were the classic prince and and princess in fairy tales, but not done in a cheesy way.

I found that I enjoyed Iko a lot more in this novel. I always liked her, but I never really saw her as an active agent to the plot. But she plays a large role, and it's easy to see her as a person of real flesh and bone rather than an android. Iko's personality is as chirpy as ever, and what really got me were her acts of bravery and selflessness. She sacrifices a lot, mainly because she knows she can afford to be damaged since she doesn't feel pain and can have Cinder fix her up good as new at the end of the day. She's absolutely loyal, and not once does she ever act coldly like we expect machines to.

"Of course I understand sarcasm," she spat. "It's not like it's theoretical physics, is it?"

Levana was absolutely ruthless, and took insanity to the next level in this book. It's not just Earthens she's cruel to, but to the people of Luna as well. Her schemes to get rid of people were horrific, and she was absolutely delusional in her attempts to force her people back to her. Her attempts to combat Cinder were terrible, especially since she's so fond of using glamour to control people. I think it's safe to say that under no circumstances would I want her as a leader, and I'm glad she got what was coming for her.


"When she catches you," the guard snarled, "my queen will eat your heart with salt and pepper."
"Well," said Cinder, unconcerned, "my heart is half synthetic, so it'll probably give her indigestion."

The plot absolutely unpredictable. The characters were separated time and time again, and nothing ever went according to plan. When you thought things couldn't get worse, it did. Levana was absolutely ruthless, her ploys devastating, and time and time again I was shocked by the unexpected turn of events. The constant twists and turns really upped the stakes, and you can't help but feel that even if they do succeed, everything still can go wrong.

I'd be lying if I said I didn't read this for the romance. It may not be the dominating factor, but it was still present, and I loved absolutely every word of it. All four of the couples had different romances, from cute and sweet to protective and fierce. It was there just enough for my heart melting, to feel the agony of the couples being separated. But at no point did any of the characters let the absence of their other half hinder them. Cinder accomplished everything without Kai, Scarlet kicked ass without Wolf's protection, Cress didn't rely on Thorne to get her work done, and Winter didn't need Jacin to be determined to do what was right. I really love them all in their own way!

The climax. The climax! It was the perfect blend of excitement, agony, and fear. The finale lacked nothing: it was action-packed, filled with emotional devastation, doubt, and determination. It wasn't as straightforward as one would think, with a simply confrontation. No, it was a lot worse, with Levana pulling everything she had against Cinder. And in true Marissa Meyer fashion, there were unsuspecting turns within the climax alone. Things kept getting worse and worse, and my heart kept falling for Cinder. I really liked how Cinder was simply overpowered standing over Levana, that it really was a test of wills and good hearts. It was absolutely amazing, one of the best climaxes I've ever read!

There is so much more I want to say, but this review is already long enough. Just know that this finale is absolutely amazing in every and all counts, and Meyer truly outdoes herself. I have never read--and I don't think I ever will--read such a unique retelling as this. I'm absolutely devastated that this is the end. I've come to love the characters like they were my own friends, and I'm going to miss them so much. It's hard to imagine how about a year ago, I was hesitant on starting the series about a cyborg version of Cinderella, because I can't imagine my life without this series and all the amazing things about it. Marissa Meyer is a true master, and I hope she'll be writing for as long as I'll be reading, which is forever!

"And they all lived happily to the end of their days."