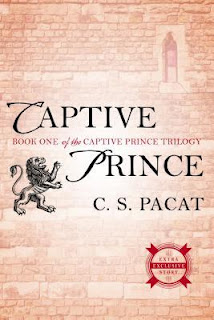 
"This was Vere, voluptuous and decadent, country of honeyed poison"
Damen is a warrior hero to his people, and the truthful heir to the throne of Akielos, but when his half brother seizes power, Damen is captured, stripped of his identity and sent to serve the prince of an enemy nation as a pleasure slave.
Beautiful, manipulative and deadly, his new master Prince Laurent epitomizes the worst of the court at Vere. But in the lethal political web of the Veretian court, nothing is as it seems, and when Damen finds himself caught up in a play for the throne, he must work together with Laurent to survive and save his country.
For Damen, there is just one rule: never, ever reveal his true identity. Because the one man Damen needs is the one man who has more reason to hate him than anyone else...

A secret identity. Deadly politics. Manipulation. Betrayals. Tension. Emotional turmoil. This book has it all!

After the death of the king of Akielos, Prince Damianos "Damen" is the next in line to inherit the throne. That is, until his half brother betrays, captures, strips of identity, and ships Damen off to the enemy nation Vere to serve as a pleasure slave for their prince, Laurent, as a gift. Damen's main goal is simple: find a way to escape, return home, and reclaim his throne. But escaping isn't as easy as it seems, especially since Laurent himself finds himself in the midst of betray within his own court...

Damen's situation at the beginning of the book immediately captured my sympathy. I so badly wanted him say "screw this" and fight his way to freedom, because after everything he's gone through, he definitely deserves it. Seeing him being treated like a slave frustrated me, because as a prince, he should never be subjected to that kind of treatment. But Damen had a lot more patience than I did, sucking up his pride and doing everything he could from letting others become suspicious of him. He bade his time expertly, waiting for the right time to escape while gaining intelligence about Vere and what was happening to Akielos. Add to the fact that should Damen's true identity be discovered, Laurent personally would execute Damen immediately, resulting in Dame doing everything he could--no matter how humiliating--to keep his identity a secret, even if it meant acting like a slave. However, what I really liked about Damen was his slow shift away from his own escape to helping his own people within Vere. Damen put finding a way to free his people living in the abusive servitude of Veretians over his own escape. As the rightful heir, he needed to escape to reclaim his throne and settle everything down. But as a king, Damen put his own people before his own needs. And that, my friends, is the mark of a good king, who isn't selfish even when being selfish would have helped restore his name and people.

"He wanted to be free. He wanted to find his way home. He wanted to stand in the capital, raised on its marble pillars, and look out over the trees and blues of mountains and ocean. He wanted to face Kastor, his brother, and ask him, man to man, why he had done what he had done. But life in Akielos went on without Damianos. These slaves had no one else to help them.And what did it mean, to be a prince, if he did not strive to protect those weaker than himself?"

Laurent began the book off as a very pompous character. I was very wary of him and his actions, especially since everything had some kind of double meaning or consequence to them. Nothing was every straightforward with him, except for his cool disdain and insults. I kind of had a hot/cold relationship with him at the beginning, as I'd hate him for his treatment to Damen, become intrigued by his very obvious mask, and go back to disliking him when he did something horrible. But when Laurent did show some kindness (well, it seemed like a bit of stretch to be called "kind" given everything he did one way or another benefitted him), I started to warm up to him. And after that one and very rare scene of vulnerability. He's one of those characters that I want to watch break, just so that we can get past his cold demeanour and see the actual kind being underneath.


"If only my murder weren't the catalyst, it's a scheme I would wholeheartedly support."

The writing is a little different from what I'm normally used to, more description than dialogue, but I found myself reading every word of description, needing it to see the full picture. The plot was filled with horrifying events and customs for Damen, along with an added sense of suspense. There were some parts that were predictable, but other parts--like characters--weren't predictable at all. I never knew who to trust, what information was accurate, or whether someone had a hidden agenda, aiming for the king's favour or for the throne. I'm not really a politics person, but I found myself quite fascinated by the web of danger politics in this book. I would have preferred a little more action, but it was an interesting change trying to figure out everyone's motives and the double meanings of everything.

This book is perfect for fans of The Winner's Curse and other political-driven fantasy books, and sets up a very solid promise of a great world and storyline. There's some intimate scenes that will leave you blushing, as well as some truly horrible people and morbid fascinations. I completely ship Damen and Laurent together, though they both still have a long way to go, and hope that we'll get to see a developing relationship between the two!