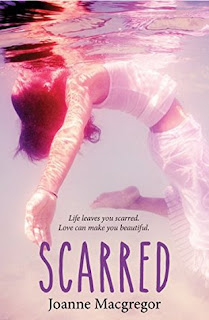 Life leaves you scarred. Love can make you beautiful.
Sloane Munster had the perfect life, until she didn’t. Now seventeen year-old Sloane is trying to reboot her life after a serious accident left her badly scarred and emotionally traumatized.
Starting her senior year at a different school, she recognizes Luke Naughton, a swimmer whom she once had a crush on, in her new class. But when she smiles at him, he glares back with revulsion and she’s sure he’s disgusted by her ugly scar. No matter how hard she tries to keep out of his way, life keeps bringing them together and despite misunderstandings and guilty secrets, the chemistry between them sparks. Meanwhile, tensions are mounting at their school where bullying is rife and Sloane is not the most deeply scarred person.
Sharp with bittersweet humor, Scarred is an intense, beautiful, compelling story of life, death, damage, and fighting for love against all the odds.
A great read for fans of Sarah Dessen, Stephanie Perkins and Abbi Glines.


Scarred begins the story of 17-year-old Sloane, who after an accident, is finally trying to get on with her life by attending a new school. Within the sea of new faces, Sloane recognizes Luke, an old crush, but is immediately taken back by the hostility and disgust he has towards her. As she tries to navigate the social pains of high school once again, a painful past will reveal itself as Sloane figures out just what it is that keeps driving her and Luke apart, when it's obvious he wants nothing to do with her.

Right from the beginning, we're introduced to Sloane's mindset on life. The doubt of one's accomplishment being offset by sheer determination is an feeling everyone goes through to, immediately allowing readers to connect to Sloane on a personal level. For Sloane, her challenge is to make it through being the new kid at school, paired with a scar that will inevitably attract negative attention. What Sloane discovers instead only makes her life worse: an old crush who suddenly has become hostile towards her, a verbally abusive teacher, and a social circle of bullies.

Answer: Do I have a choice?"


Luke was an interesting character, trying to cope with the sudden appearance of Sloane. He has nothing against her personally, yet has everything against her. At first, I couldn't understand why he was acting so petty and hateful, and found him insufferable for how he treated Sloane. However, once his situation was revealed, his actions became justifiable to me, and I couldn't help but begin to question whether I would react similarly if I were in his shoes. Luke definitely has his own sets of problems, and needed every bit as much help as Sloane does to face them.

Though romance was a factor of the book, I would consider it more as a tool for both Sloane and Luke to find a way to confront their negative emotions. For Sloane, being in love meant trying to find a way to be honest, and being able to sacrifice her relationship in exchange for the greater good of truth. For Luke, a relationship meant that he needed to confront the fact that his parents were only present in the past, forever unable to able to see past the memory of Luke's brother to see Luke himself.

This novel raises some very thought-provoking questions. What happens to both the parties after an large accident? Is it right to blame those indirectly related? How do you deal with adults who abuse their role of authority? Where do you draw the line for forgiveness? Though all these questions that have no distinct right answer, it really gets you thinking about just how far you'd be willing to go, and how far you think you should go.

The last half of the book brought together quite a lot of major issues in this world. Things like invisible injuries, pushing people past their breaking point, coping, moving on, and forgiveness were all major themes in the novel. This is a story that tells of very real situations, and what happens to both sides of parties involved in major accidents. It may be a work of fiction, but the reactions and emotions were all very realistic, including the horrifying final event. These are very real issues, and sadly, some of them seem to be growing in frequency. The novel ends off both bittersweet and a bit open-ended, just like how events in life normally are.


I'll leave saying that this thoughtful novel captures one of my favourite quotes perfectly: that so many of our problems would be solved if we simply talked to one another, rather than assuming. Kindness is something that has no price for, and we should be willing to give it at any moment's notice.