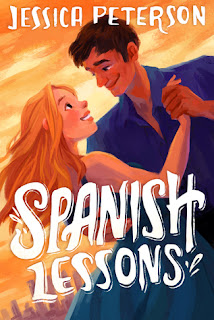 Vivian Bingley has big plans for her semester abroad in Spain…
Along with her BFF, Maddie, Vivian hopes to indulge her inner Art History nerd by visiting the best museums in the world. She also wants to tackle more practical concerns—like a less than stellar GPA in her major, Economics—with the help of a Spanish tutor.
But falling for her studly Spanish tutor definitely isn't one of them.
Madrileño Rafa Montoya is the stuff study abroad dreams are made of: super studly and super smart. He also happens to be super into Vivian. With his wicked dancing skills and his passion for the arts, he tempts her to throw caution to the wind and live out her wildest dreams.
Only problem? Maddie wants Rafa, too, and Vivian promised herself she’d never settle for second best again…not after a hookup-gone-awry last semester left her heartbroken. Is it best for Vivian to protect her heart at all costs? Or is letting Rafa in worth the risk?
This book is a New Adult contemporary romance, suitable for mature audiences.

Prepared to be taken away by the beauty of Spain and by a very charming Madrileño!


This first novel to Jessica Peterson's Study Abroad series takes us to Madrid, Spain, where her protagonist, Vivian, is enrolled for a semester for an exchange program. After just getting out of a messy lead-you-on relationship, Vivian knows that falling in love in Spain is illogical since she'll be leaving for home in a few months. Studying in Spain is to be Vivian's big break, where she can manage to boost up her GPA by acing all her classes. That is, until she realizes she's flunking her Spanish econ classes, and finds herself requesting the school for a tutor, who just happens to be extremely good-looking...

Vivian begins the story off getting off a plane from America to Spain. Immediately, she's hit by the cultural difference and by the language barrier, and as someone who can't speak a word of Spanish, I really sympathized with her. The frustration of trying to speak the language, understand the culture, and learn the currency all while under pressure was very realistic. Throughout the book, not only is Vivian's relationship with Rafa is tested, but also with Maddie, her best friend. What I particularly liked was how much Vivian cared about Maddie, and how she generally tried to stay away from Rafa for her. Vivian's intentions were of genuine loyalty to her friend.


"Maybe it's not doing what I should do that requires courage.

Maybe it's doing what I want to do that is the courageous thing."


Rafa Montoya is about as smooth as gentleman as there is out there. He's the guy everyone dreams of: handsome, smart, extremely considerate and understanding, and he's someone who encourages people to chases their dreams. Rafa is literally too good to be true, and his patience for Vivian was off the charts amazing. And even when Vivian voiced her concerns, he took it with grace, and didn't do anything stupid like many guys in books do. If only more people like him existed...

The ending was cute and given Rafa's smarts, I don't doubt the possibility. It transitions the first novel into the second novel very nicely, which is about Maddie and her time studying abroad in Madrid. This book will have you blushing at the steamy moments, sighing at Rafa's amazing personality, biting your nails in anticipation of Vivian making her decisions, and overall wishing you were in Madrid with them! I'm definitely looking forward to reading the next novel!