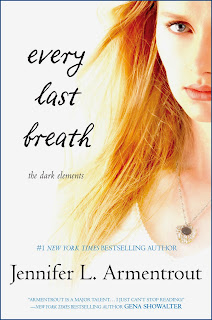 Blurb (Goodreads)
Some loves will last ’til your dying breathEvery choice has consequences—but seventeen-year-old Layla faces tougher choices than most. Light or darkness. Wickedly sexy demon prince Roth, or Zayne, the gorgeous, protective Warden she never thought could be hers. Hardest of all, Layla has to decide which side of herself to trust.Layla has a new problem, too. A Lilin—the deadliest of demons—has been unleashed, wreaking havoc on those around her…including her best friend. To keep Sam from a fate much, much worse than death, Layla must strike a deal with the enemy while saving her city—and her race—from destruction.Torn between two worlds and two different boys, Layla has no certainties, least of all survival, especially when an old bargain comes back to haunt them all. But sometimes, when secrets are everywhere and the truth seems unknowable, you have to listen to your heart, pick a side—and then fight like hell…

✭ ✭ ✭ ✭ ✭
HOLY CRAP. THAT WAS AMAZING. I literally could not put this book down! And don't get me started on my FEELS!!!

Every Last Breath picks up literally seconds after the last book. The identity of the Lilin has been revealed, and it's a devastating one. Layla needs to find a way to stop the Lilin, since it can take people's souls with merely a touch, because if she doesn't, the Alphas (aka angels) will come down and lay waste to Earth as a means to eliminate the Lilin. You know, the whole "sorry, but we need to kill the Lilin, and to save ourselves the trouble from looking for it, we're just going to kill everyone on the planet and start anew." Because that's totally the solution to everything, right? WRONG. This puts Layla in a time-restricted position. And if that's not bad enough, Layla also has to figure out a way to save her best friend from a fate much MUCH worse than death. Plus she must make her choice between Roth and Zayne. God, this girl has a LOT going for her, yet she makes it through brilliantly.

I really liked the development of Layla's character arc. There is a clear difference from the Layla in the first book, and the Layla in the last book. Not that she really was much of a pushover, but we get to see Layla stand her ground more and more, and to see grow in self-esteem. She went from accepting herself as a "mule," someone who would never fit in, to accepting herself simply for herself. Layla is able to realize that there is absolutely nothing wrong with her, that she in unique and is not powerless anymore. She's matured so much, and has gained so much wisdom. From the girl who ran from the Poser demon at the beginning of the series, to the girl who marches up to face the world and risk her life, who doesn't need anyone's protection. It was just. So. Good.

Of course, we have no less of romance. Layla makes her decision over which boy to love: Roth or Zayne? I'll save the answer for that in the spoiler section of this review, but know that either way, the romance was top-notch. So many swooning moments, cute moments, and downright steamy moments. The concern for Layla for said lucky guy was adorable, and my heart...oh, my heart. Or, I should say what remains of my heart...

This book didn't come without hard sacrifices. Actually, the most devastating feature of this book was ALL THE PLOT TWISTS. I'm dead serious. NOTHING is predictable. You might think you know what's going to happen, and then BAM, thrown right out the window. Literally. Every prediction I was practically hurled out across the ocean, to the next continent. In fact, I'm pretty sure there's a nice pile of discarded predictions sitting there. So much happened. So many new revelations and sacrifices in the ways you least expected them. Identities? People? Places? I didn't see ANY of those coming. All my predictions, both before I read the book and while I was reading the book, were way WAY off. Just... Mind. Blown. Nothing could have prepared me for it...

I'm afraid that the rest of review will be spoilery. I'm sorry. But my feels demand to be heard.

First off: TEAM ROTH. Oh my god, Roth. Is it possible for me to love him even more than before? He got the girl, YES! And all those moments with him? *swoons* Roth, drunk, thinking that Layla left to be with Zayne? My god. Seeing him so sad, and then when he realized that he was wrong, that Layla was choosing him? My heart soared! I was so happy! Alas, I am but a silly fangirl, so I am extremely (and shamelessly) biased. For those of you who were cheering for Zayne...I'm sorry. But from the looks of it, he and Stacey might become an item very soon, so all hope isn't lost!

Speaking of Zayne. I truly feel bad for him. He loses Layla and his father, even goes through funerals for both of them. And he's expected to be the next clan leader, with his father's passing. That's a lot to handle, and he's burdened with a lot. Loss and responsibility. Those two aren't a good mix, as they make a very stressful position. But if anyone can handle it, Zayne can.

I think Layla going into Hell for Sam's soul was the right thing to do. Yes, it may not have been smart and a tad selfish as she didn't care about all the other souls the Lilin had taken, but from a friend's point of view, what she did was right. She went to Hell and back for her best friend. I seriously wish I had a friend like her, you know? That's called loyalty. That's called friendship.

Did anyone else feel shocked when Bambi and Robin gained human forms? (Also, Robin! He's pretty cool!) I didn't see that coming, at all! To think that Roth and Layla have persons on them...yeah, I'm a little creeped out, but... And when the witches demanded Bambi? I think I had a heart attack! In a way, I'm glad that they didn't demand something hefty like someone's death, but at the same time, losing Bambi isn't something to have been taken lightly. And the fact that Cayman knew that Roth may go back on his word, and was willing to die for him to keep Bambi? Oh my god. Roth, having to choose Cayman or Bambi...that's a terrible thing to make him do! But at least no one died in the deal... I was hoping that they'd find a way to get Bambi back, but I guess not...

We also get the find out exactly what Layla is. Yes, she's half Warden, but NO, she's not half demon! Upon meeting Grim, we get a small history on Lilith, which was super helpful...and also, he made a whole bunch of revelations! Layla's feathered wings, why she smells like an Upper Demon, why she doesn't feel cold, the sudden control over her urges to feed? She's immortal! Drank the blood of an Original fallen angel! Whoa!

When I found out that the Lilin and Layla are connected through a kill-one-and-you-kill-the-other bond, my immediate thought was crap. Layla's going to sacrifice herself, isn't she? I mean, I guess she kind of did the right thing...BUT STILL. It wasn't any easier to read about! And Roth! He went through his own personal hell for six days! Zayne held a funeral for her, and everyone thought she was dead. I cannot even begin to imagine what everyone went through, thinking Layla was dead. Though I must say, Layla's reunion with Roth? Ahh, that was super cute <3

Speaking of Layla's death... I really liked how the book ended with open-ended. Did Lilith chose to save Layla because she loved her, or because Lilith wanted to save her own skin? And who is Morris? (Seriously who is he???) We're not given any absolute answers, but they're not ones that leave us hanging. It raises debates, and gets people thinking, which I find a good trait. No definite answers, up for interpretation...

Okay okay, I need to stop else I'll go on for centuries about this book, and this review will stray from being a review to a dump of emotions. It sort of already is, eh heh heh...

All in all, a fantastic ending to the series! The pacing was good, the characters having grown so much, and the ending was awesome! I'm really sad to see these characters go, but I know that everyone is in a good place. I couldn't have asked for a better conclusion!
Posted by Erika at 3:57 PM