Review: The Tiger at Midnight by Swati Teerdhala 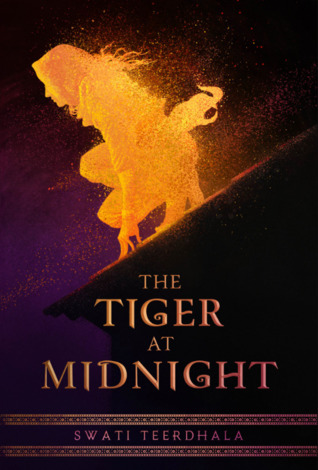 
Esha is a legend, but no one knows. It’s only in the shadows that she moonlights as the Viper, the rebels’ highly skilled assassin. She’s devoted her life to avenging what she lost in the royal coup, and now she’s been tasked with her most important mission to date: taking down the ruthless General Hotha.
Kunal has been a soldier since childhood, training morning and night to uphold the power of King Vardaan. His uncle, the general, has ensured that Kunal never strays from the path—even as a part of Kunal longs to join the outside world, which has been growing only more volatile.
Then Esha’s and Kunal’s paths cross—and an unimaginable chain of events unfolds. Both the Viper and the soldier think they’re calling the shots, but they’re not the only players moving the pieces. As the bonds that hold their land in order break down and the sins of the past meet the promise of a new future, both rebel and soldier must make unforgivable choices.
Drawing inspiration from ancient Indian history and Hindu mythology, the first book in Swati Teerdhala's debut fantasy trilogy captivates with electric romance, stunning action, and the fierce bonds that hold people together—and drive them apart.

Now this was a fun book! I haven't read a cat-and-mouse chase quite like this one before, and it went beyond all my expectations.

Kunal was Esha's dark to her light; he made an excellent foil character, with his structured tactics and careful planning. I really liked how even though his plans kept falling through in capturing Esha, the experiences kept him humbled. He didn't get angry or cocky; he just had to be smarter.

The whole cat-and-mouse thing was just so very fun to read! Kunal would lay clever traps for Esha, she would unintentionally fall for it, he would capture her, she would cleverly escape. It got to the point where they both anticipated the routine, knowing they would somehow meet again and escape again. But seriously, the traps Kunal lay and the methods Esha used to escape them--they were brilliant!

A lot of things are revealed throughout the book that I won't talk about, lest I spoil it. Some of it I'm at bit wary of, but have hopes it will work out. But know that there's framing, neutrals, clever captures and even more clever escapes, and kindling of an enemy-to-lovers relationship in the works. I really enjoyed this book, and am looking forward to the next one!