Review: A Court of Wings and Ruin by Sarah J. Maas 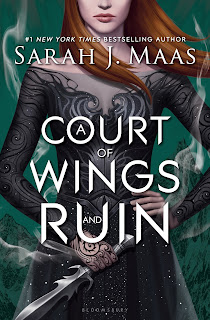 
A nightmare, I’d told Tamlin. I was the nightmare.
Feyre has returned to the Spring Court, determined to gather information on Tamlin’s maneuverings and the invading king threatening to bring Prythian to its knees. But to do so she must play a deadly game of deceit—and one slip may spell doom not only for Feyre, but for her world as well. As war bears down upon them all, Feyre must decide who to trust amongst the dazzling and lethal High Lords—and hunt for allies in unexpected places.

This book was almost as good as ACOMAF--and though I say "almost", it still is one of the greatest books known to humankind. Though everything about this book was excellent, there were just some aspects that didn't compare in intensity to the emotions I felt during ACOMAF. Nevertheless, it was fantastic, filled with action, deception, and steamy scenes, plus some very raw and emotional moments.

After the disaster with Hybern in the last book, Feyre is back at the Spring Court--pretending to be Tamlin's lover, but actually as a spy. In an attempt to find out Hybern's plans and to bring her wrath down upon the Spring Court for what Tamlin did, Feyre enters a precarious game to both avoid detection of her ulterior motives and to garner information. War with Hybern is right on the shores, and Feyre desperately needs to find a way to rally together the courts of Prythian to fight and protect their lands and the humans from Hybern's conquest.

"We will be outnumbered, and exhausted, and it will not end well... It is a new world, and we must decide how we are to end this old one and begin it anew. We must decide if we will begin it by allowing those who cannot defend themselves to be slaughtered. If that is the sort of people we are. Not individual courts. We, as Fae people. Do we let the humans stand alone?"


Where on earth do I start? Feyre probably would be a good choice. God, after that ending in ACOMAF, I was so ready to see what plans Feyre had for Tamlin and his Spring Court. I'm a sucker for revenge plots, especially those with "wolf in sheep's clothing" threads. And Feyre...she destroyed all my expectations. Though she didn't grow as drastically as she did in ACOMAF, her growth still amazed me, learning the consequences of what her actions had on Prythian and to herself. Feyre's fae side was definitely tampered by the presence of Nesta and Elain, having now joined the mix, striking a balance between her life at the Night Court and her old tethers to the human world.


I wasn't sure I'd been born with the ability to forgive. Not for terrors inflicted on those I loved... But there was a fundamental pillar of steel in me that could not bend or break in this. Could not stomach the idea of letting these people get away with what they'd done.


And then we had Rhys. RHYS, who became the epitome of book boyfriends in the last book. Who insisted and showed to the world that Feyre was his equal; not his mistress, not his lover, not someone who could easily be used as leverage against Rhys given how powerful and strong she was. Rhys demonstrated to everyone Feyre was most certainly not a weak point for the Night Court in any way. We also got more of Rhys' backstory regarding what he had to witness while in Amarantha's service, all the painful and cruel things he didn't divulge to Feyre in the last book purely because of how monstrous the things he did--or in many cases, didn't do--there. My poor, poor Rhys. But it just makes me love him more, for all the sacrifices he made for his court! <3

"I do not let you do anything... You are your own person, you make your own choices. But we are mates--I am yours, and you are mine. We do not let each other do things, as if we dictate the movements of each other."


Nesta herself stole quite a large amount of the show. I came in with a strong feeling she would be playing an important role, but I had no idea what. And damn, was she fearless. Utterly fearless, completely bold. And can we talk about that tension and fiery attraction simmering between her and Cassian? My life, guys, is literally in ruins because of what happened (or didn't happen) between these two. I'm hoping she gets an entire book to herself in the spinoff books with Cassian! I SHIP THEM I SHIP THEM I SHIP THEM.

Nesta said, "it doesn't look like you're exercising anything other than your mouths." [...]

Cassian extended a wrapped hand, his fingers curling in a come-hither motion. "Scared?"

Like with ACOMAF, the other side characters were as strong as ever. They were all so wonderfully complex to the extend that I'm certain they each could have their own books. We get so much from all of Rhys' inner court: it's clear that if any of them didn't exist, the entire plot would have fallen apart. And, both to my expectation and delight, we get more of Lucien too. From ACOTAR, I knew he was a strong character, but in this book, it blows up just how unique his situation and character is.

This book definitely was more strategic than the others, in a battle sense. War took up a relatively large section of the ending of the book, and though I often find war planning drains a bit of the original creativity in the plot, Feyre wasn't often in the midst of the battlefield, which provided some neat alternative to fighting a war without actually fighting on the fields.

There was loose ends in the book to be picked up in the later spinoff books, which is just cruel given the sheer amount of loose ends present. I counted 8:

I'm really hoping they'll all be addressed in the next books. I kind of want Nesta and Elain to get their own books, and maybe Miryam. Agh, but the synopsis for the spinoff books haven't been announced yet, so there's no way to be certain whether they'll get it or not!

"But this is war. We don't have the luxury of good ideas--only picking between the bad ones."

I'm really going to miss reading about Feyre and Rhys. But I'm satisfied with where they are (I mean, that moment with Rhys at the end--and if you're read the book, you KNOW what I'm talking about because MY POOR HEART NEARLY GAVE OUT FROM FEELS). I'm really hoping they'll be making cameos in the spinoff books, just because it would literally be a crime to not have them in it. No one should be able to escape their mention, because no one will ever be as amazing a duo as those two! This series overall has morphed into one of my utmost favourites, and though I'm sad to see Feyre and Rhys' story come to end, I'm glad that there still will be more to come of this world and these characters in the future! My heart is ready for the next journey, whoever's it will be!


"I'm grateful," he said after a while, as the camp beneath us stirred in the building light. "To have you army side. I don't know if I ever told you--how grateful I am to have you stand with me."

And, as a final fangirl sign-off to the Feyre x Rhys series: RHYSSS I'M GOING TO MISS YOU SO MUCHHH. WHY DOES YOUR STORY HAVE TO END, WHYYY??? PLEASE COME BACK AND SEDUCE US SOME MORE, PLEASEEEE.