Review: Secrets of the Tally by Halie Fewkes 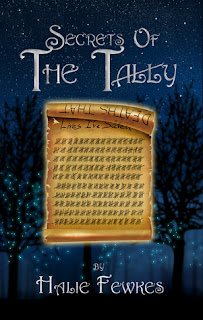 
Meet Allie: she's just woken up in an empty forest with blood on her hands and everything she's ever known wiped from her mind. In her survival-oriented world, people are hunted by vicious predators and it quickly becomes clear that they are specifically hunting her.
Allie's friends and sister have no insight as to why she's a target, and her only clue is a list of tally marks she finds tucked away, detailing how many lives she's saved and how many deaths she's caused. Judging by the amount of ink slashed across the page and the fact that nobody seems to know about it, Allie knows she used to have secrets that need to be recovered.
Without knowing whom to trust, she finds herself drawn to a new stranger in the caves they call home, and even though he won't talk about his own past, he's ready to help Allie recover hers.
The problem now is that Allie's instinct to survive is the only thing strong enough to bring her memories back. Flashes of her old self will only surface to save her from life threatening danger, so if she wants to avoid living as an echo of her former self, danger is what she must seek.

**I received a free copy in exchange for an honest review. This does not affect my opinion in any way**

I wasn't sure what to expect with this book, but holy cow, it was good. It's a classic fantasy, filled with tons of likeable characters, unexpected plot developments and reveals, creatures, magic, and tons of action. Also, the hardcover is GORGEOUS. Like, it's nothing I've ever seen: shiny and smooth with a glossy feel. It is beautiful, with an equally amazing story folded between its pages.

This story is about Allie, a girl who wakes up with no memory and possessions expect a mysterious sheet of paper. One side reads Lives I've Saved and the other Deaths I've Caused, and both have tally marks on either side. Gaining back her memory isn't as easy as it seems, especially when it becomes apparent Allie had quite a lot of secrets to keep, none which she can remember anymore.

The system of the world's denizens was simple but unique: there were Humans (like you and me), and the Escali (evil quasi-humanoid creatures). Amongst the Humans were mages, the only people who can fend off Escali. Each mage only has one ability, except for the Epic, who is an extremely powerful being in possession of all the magical abilities. There are only two Epics: one Human and one Escali, and they thus lead the ever-constant battle between the two races.

For the first bit of the book, I found Allie's search for her lost memories a bit typical. Though her frustration and determination worked to set up her strong personality, I felt her beginning very similar to other amnesia character story arcs. However, everything changed once the plot picked up, and my like for Allie grew exponentially. She quickly came to accept there wasn't much she could do, and stopped trying to live a shadow version of herself, focusing on what she could do and not what she couldn't. I was so glad the plot wasn't revolved only around Allie regaining her memory; rather, Allie's memory lost was just a state of being, nothing more or less. Everything was bigger than her, which Allie recognized, putting the greater good of others first. That's a hero right there, and I loved her for it!

"I was done trying to identify with Old Allie, trying to make decisions she would have made. I was New Allie now, and I had to choose what I wanted to do, not for the sake of recovering who I used to be, but for the sake of moving on."

Can we talk a bit about how excellent the identities were done in this book? Not once was I ever able to successfully guess the true identities of people. The author did extremely well in leading me onto believe someone was of one identity, only to later reveal something completely mind-boggling and unexpected. And in my opinion, that made the story all the better, because this revelation happened to more than one character, constantly keeping me on my toes!

There is simply so much more to this world than it seems. Scratch that--there is simply so much more to the book than it seems. The instant the pacing and plot picked up, the book had me utterly engrossed, and I can tell the author isn't done with these twists. There are tons of secrets left to uncover, and if the first book has been any indication, those secrets are going to be nothing like what I'm expecting them to be. I am very much looking forward to the next book and to seeing what new and exciting revelations will occur!