Review: I'll Give You The Sun by Jandy Nelson 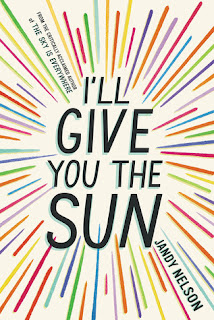 “We were all heading for each other on a collision course, no matter what. Maybe some people are just meant to be in the same story.”
At first, Jude and her twin brother are NoahandJude; inseparable. Noah draws constantly and is falling in love with the charismatic boy next door, while daredevil Jude wears red-red lipstick, cliff-dives, and does all the talking for both of them.
Years later, they are barely speaking. Something has happened to change the twins in different yet equally devastating ways . . . but then Jude meets an intriguing, irresistible boy and a mysterious new mentor.
The early years are Noah’s to tell; the later years are Jude’s. But they each have only half the story, and if they can only find their way back to one another, they’ll have a chance to remake their world.
This radiant, award-winning novel from the acclaimed author of The Sky Is Everywhere will leave you breathless and teary and laughing—often all at once.

Many thanks to one of my closest friend for lending this book to me. I'm sorry for the long wait, but I finally read it, and god, it was good. Onto the review.

Not even 40 pages into the book, and I knew just how powerful it was going to be.

This book...it just captured the essence of so many things. The vivid imagination of a budding artist. The heavy guilt of lies, of betrayals to others. The feeling of forcing yourself to fit into a mold in order to blend in. The frustration and jealousy of love. The desperation to atone for sins, to atone not just for yourself, but for others. The realization of being unable to take back actions, take back words, that life has no redo button and that consequences must be lived through. It was just so raw and emotional.

We have two protagonists, the Sweetwine twins Noah and Jude. Noah's story is of the earlier years, whereas Jude's is of the later years. Both are struggling with different issues, and as the book goes on, you realize the threads of their lives past and present are more interconnected than you ever suspected.

We were all heading for each other on a collision course, no matter what. Maybe some people are just meant to be in the same story.

Noah and Jude's perspectives were so very different, so full of individual personality. Their perspectives also echoed their ages, with Noah telling his story when he and Jude were 13, and Jude picking up when they both were 16. Noah's narrative was chaotic and non-linear, flooded with artistic imagination and similies, but also innocent with youthness. Jude's thoughts were much more sarcastic and dry, typical of a teenager's thoughts, logical as she struggled to find proper closure.

What I liked about Jude was her quirkiness, and how she wholeheartedly believed in some rather strange things. She was downright strange, but in a fun way; Jude firmly believed in such ridiculous things, which really showed her desperation to find some way to fix her life, a way to help her get through just why she ended up where Noah should have been.

Write your sins on apples still hanging on the tree;when they fall away so do your burdens.(There are no apple trees in Lost Cove. I've tried this with a plum tree, an apricot tree, and an avocado tree so far. Still burdened.)

And then we had Noah's story. We really got to see the beginning of everything, to see how small conflicts spiral completely out of control, lasting to 3 years later where Jude picks up the story. Noah was dealing with difficult identity and family issues, all which was portrayed so intensely in his narrative. Its vividness was absolutely stunning!

The house gets so big it takes hours for me to walk from my bedroom to the kitchen and back, so big that even with binoculars, I can't make out Jude across a table or room.


As I mentioned in the beginning of this post, this book is powerful by the development of plot and the topics that occur throughout. Betrayal of family, conflict of heart, actions taken too far, desperate measures, everything. Such strong issues about families falling apart and trying to find ways to seal the holes without knowing the holes are actually giant cracks. And god (or Clark Gable, as Jude likes to say), the writing! It conveyed pure emotions like lost and hopelessness in such honest ways. It was absolutely beautiful.

"Maybe we're accumulating these new selves all the time." Hauling them in as we make choices, good and bad, as we screw up, step up, lose our minds, find our minds, fall apart, fall in love, as we grieve, grow, retreat from the world, dive into the world, as we make things, as we break things.

I'm not a big contemporary reader, but this book was definitely worth the read. There's just so much wonder and emotion packed in it, from innocence to anger to guilt to redemption. It's just a whirlwind of a book that takes you on a roller coater, one I won't be forgetting for a long time!