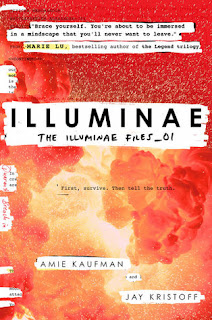 
This morning, Kady thought breaking up with Ezra was the hardest thing she’d have to do.
This afternoon, her planet was invaded.
The year is 2575, and two rival megacorporations are at war over a planet that’s little more than an ice-covered speck at the edge of the universe. Too bad nobody thought to warn the people living on it. With enemy fire raining down on them, Kady and Ezra—who are barely even talking to each other—are forced to fight their way onto an evacuating fleet, with an enemy warship in hot pursuit.
But their problems are just getting started. A deadly plague has broken out and is mutating, with terrifying results; the fleet's AI, which should be protecting them, may actually be their enemy; and nobody in charge will say what’s really going on. As Kady hacks into a tangled web of data to find the truth, it's clear only one person can help her bring it all to light: the ex-boyfriend she swore she'd never speak to again.
Told through a fascinating dossier of hacked documents—including emails, schematics, military files, IMs, medical reports, interviews, and more—Illuminae is the first book in a heart-stopping, high-octane trilogy about lives interrupted, the price of truth, and the courage of everyday heroes.

If you haven't physically seen this book before, stop reading this review and go pick it up. Do it now. This book is hands-down one of the most unique books I've read, and I'm ashamed I didn't read it when I first saw it.

Set in 2575, this book follows Kady and Ezra, who's day goes from bad to worse when their home is attacked by a rivalling company. These two find themselves on two different evacuation vessels, desperately trying to outrun an enemy fleet chasing them through space, wanting to kill al survivors and destroy any evidence of the attack. But it's not just the BeiTech fleet bent on killing them that's an issue for the survivors; problems are surfacing from within, with a mysterious plague spreading aboard one of the surviving evacuation vessels, and with the AI that is charge of protecting them is reaching some rather extreme conclusions, and ultimately, solutions to save them...

First off, this book is composed of a series of documents, including hacked private messages, classified reports, battleship schematics, audio recordings, etc. It doesn't exactly follow a linear narrative, with the documents all scattered in type, but all relevant to one another, chronologically. What made it fun was that there were some parts that weren't directly spelt out for you, but if you paid closer attention, you could actually piece together specific things that actually enhance the story. For example, checking the timestamps. Kady made numerous attempts at breaching the system's security wards, and if you take a closer look, you'll realize she was absolutely relentless, attempting them every few hours before successfully deleting the security personal's profile within the day. Those little things truly speak of Kady's character, and really emphasize her proficiency at computers and her determined nature.

I absolutely loved Kady's character. Her character checked off so many boxes: a strong moral compass, courage, brilliance and sassiness. It's been a while since I've read of a well-written sassy character, which definitely made it a plus. Kady was never content to just sit by and wait for other people to tell her about the situation; she took matters into her own hands, finding out everything she could, before information made it to the other civilians, or purposely didn't make it to them. Her hacking skills were incredible, and her logic was equally as strong. Her ability to make on-point conclusions based off observations, or even her ability to cause distractions in order to accomplish her goals were all brilliantly executed. What I particularly loved about her was her ability to love as fiercely as she did; she refused to leave the people she loved behind, and even after she had lost her personal hope, she refused to let her hopelessness be the reason why others couldn't be able to find out the truth, or have a chance at surviving. She stuck to her heart and wasn't afraid of doing what was right, no matter the personal cost.

"The only life I'm risking is my own, Captain. I could have shut down your engines. Left you drifting in the black so you'd have no choice but to wait for me. I could have blackmailed you. Made you buy your own life by saving the one I care about. But I didn't. I won't."
"And why not?"
"Because that'd make me just like you."

I absolutely loved the concept of AIDAN. I won't say too much about it, but it was brilliantly done. The logistics and "thought" process behind its motives were pure logic, and easy to understand on the most basic sense. Its inability to properly understand human emotion made it entertaining to read about, especially its blunt analysis of Kady's seemingly "irrational" behaviour. AIDAN was the perfect foil to Kady; equally as smart, but without a proper heart to act upon, it really emphasized the strength of Kady's morals. I really enjoyed AIDAN, and look forward to learning more about it in the next book!

I still cannot fathom her pattern. My brain the size of a city, and still she is beyond me.

They are beyond me. These humans.

With their brief lives and their tiny dreams and their hopes that seem fragile as glass.

Until you see them by starlight, that is.

The constant shifts in document types made the story very exciting and interesting to read about. I was eagerly awaiting to see all the nifty pages, to see how they would spring up, and what relevance they would play to the plot. There were just so many "ah-ha!" moments, incorporating visual pictures, words, and numbers to truly give you the big picture of what was going on. You can't help but feel entirely immersed in the story, feel like this is real, that this actually happened, that these documents were actually stolen from classified sources. It's like one big puzzle, with smaller puzzles along the way that have small clues to help you solve the bigger puzzle!

There's not much more I can say about this book without giving it away, but this overall is a fresh and unique take on storytelling. I absolutely cannot wait to read the next one!