Everything, Everything Review + Movie News! 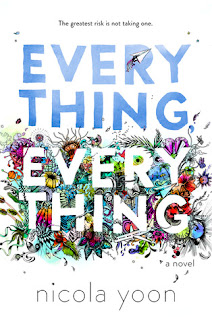 
My disease is as rare as it is famous. Basically, I’m allergic to the world. I don’t leave my house, have not left my house in seventeen years. The only people I ever see are my mom and my nurse, Carla.
But then one day, a moving truck arrives next door. I look out my window, and I see him. He’s tall, lean and wearing all black—black T-shirt, black jeans, black sneakers, and a black knit cap that covers his hair completely. He catches me looking and stares at me. I stare right back. His name is Olly.
Maybe we can’t predict the future, but we can predict some things. For example, I am certainly going to fall in love with Olly. It’s almost certainly going to be a disaster.

If you know me, you'll know I'm not super huge on contemporary. My track record is a checkered list of good ones and bad ones, resulting in a mutual relationship with the genre. But a fter reading Simon Verses the Homo Sapiens Agenda last year, my faith was restored. And this book has just further embellished it. It's similar to Illuminae, with pages of online messages, emails, lists, airplane tickets, and dictionary definitions inserted between the written story to make it unique!

This book features Madeline, a girl who suffers from a rare disease called Severe Combined Immunodeficiency, which is called SCID for short. Basically, Maddy is allergic to the entire world, and anything--cleaning products, unfiltered air, etc.--has the possibility of triggering something. As a result, she has been confined to her house to keep out and minimize all contact with unknown and threatening variables. Until a boy named Olly moves in next door, and things start to change, and being invisible isn't enough for her.

What can I say about Maddy? She was such a wonderful character to read about. I particularly enjoyed her character growth. She began off as an isolated individual who found solace in her mother, her nurse, and books (which made her 100% relatable), and was content with her lack of interaction with anyone or anything. After Olly, Maddy began to change, filling out her personality with meaningful and symbolic actions, evolving into a girl who wanted to--needed to--take a risk and just live. Live, by talking to people other than her mom and her nurse. Live, by doing something other than staying in her house all day reading or doing homework. Live, by falling in love. Live, by just being. Her pages of observations of firsts were so much fun to read about, and I loved how raw and awe-struck she was when experiencing everyday things for the first time. It really lets you relive all the mundane things you do in your life in a completely new way!

Everything about Olly's character offset Maddy's extremely well. His gymnast abilities spoke of his daring nature, and his love of math spoke of his desire to have a definite answer and solution to everything. Olly was funny, considerate, understanding, and full of life. His method of getting Maddy to talk to him at the beginning by staging a mini-enactmet of the life and death of a Burdt cake was absolutely adorable and sweet. But Olly wasn't without his own set of problems, and I particularly enjoyed how we didn't learn anything about it other than from Maddy's own single-sentence observations. Her lack of elaboration on them let us, the readers, take the scenario in our own hands, coming to our on conclusions about Olly and his family before he ever opened up to tell Maddy. There's so much depth you can get into with his character!

One character I particularly enjoyed was Maddy's mother, Pauline. Right from the beginning, after Maddy explained her guilt of having stolen her mother from living a life outside of nursing Maddy, I knew this book would go deeper than a normal book in terms of parental themes. Pauline's love for Maddy spoke of both heartbreak and sacrifice. And the fact that Maddy was receptive of how sacrificing her mother was for her added an additional aspect to both Maddy and Pauline's character depth. It really showed how adults too are not invincible, that they can be hurt just like anyone else. And especially with that ending--I truly feel this is a book adults can pick up and read, and get something very raw and vulnerable from Pauline's own story. Just...it's so touching and sad in a loving way, everything she did for Maddy, and what it said about Pauline's own self.


Did this book ever explore the theme of parent love! We had four excellent examples: Pauline and Maddy, Carla and her daughter, Olly and his mother, and Olly and his father. There were so many emotions, so many kinds of relationships. Taking a parent's love or a child's love for granted verses taking it for gratitude. They all were perfect foils to Maddy and Pauline's relationship, highlighting both the best and the worst parts in their bond. Not everyone has the same relationship you have to your parents; some have it better and worse in other ways. There are different kinds of family love, and there is no "right" answer to things like this. Love is love, and it can be hard to tell when there's too much or too little.


Overall, there was just so much depth in this book. I feel that everyone who reads it will get something different out of, each person connecting to various events on different levels. I believe Maddy's statement of how the meaning of The Little Prince changes every time she reads is true for this book as well, for everyone. It is beautifully written, really leaving you questioning just how much you can love someone as a person and as a parent. Love makes us do crazy things. Sometimes good, somethings bad. The scope love has made people do has spanned literally to everything, everything.

It was just announced that Everything, Everything is becoming a movie! Even more surprising, the two leads have already been casted. Maddy will be played by Amandla Stenberg, aka Rue from The Hunger Games, and Olly will be played by Nick Robinson, aka Ben from The 5th Wave and Zach from Jurassic World. So both already are part of the YA book adaptation realm!

What are your thoughts? Maddy is supposed to be black and Japanese, but at the moment, there's sort of a lack of mixed racial actors. But Stenberg is both black and Danish (thank you, Wikipedia), and I personally liked Stenberg as Rue, so I'm happy with the casting. I'm not sure about Robinson, just because he looks nothing like the Olly in my head. But that's all subject to change, since I know it's unfair for me to base him on my own imagination!

I have high hopes for this movie since a) it's a standalone novel, so there are no opportunities for dramatic loose ends b) the story is relatively simple, so I can't see them making any huge, mind-blowing changes c) it's a contemporary, and my experience is that contemporaries have a less fail-rate since there is no CGI involved or anything d) it should be quite visually stunning, since a major part of the novel is a trip to Hawaii e) not too many characters, so small cast, thus less opportunity for them to completely screw it over. Of course, now it all depends on who they cast to be Maddy's mother and Carla to make sure the cast is diverse as it's supposed to be...but, like any adaptation, I do have worries that they'll completely mess this book up in ways I can't imagine. Fingers cross they don't, but...

So, what do you guys think? Do you think this will be a good movie? What are your thoughts on casting?