A Gathering of Shadows Review: Lila 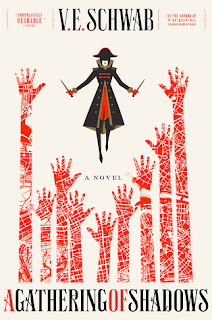 Now, restless after having given up his smuggling habit, Kell is visited by dreams of ominous magical events, waking only to think of Lila, who disappeared from the docks as she always meant to do. As Red London finalizes preparations for the Element Games – an extravagant international competition of magic meant to entertain and keep healthy the ties between neighboring countries – a certain pirate ship draws closer, carrying old friends back into port.

And while Red London is caught up in the pageantry and thrills of the Games, another London is coming back to life. After all, a shadow that was gone in the night will reappear in the morning. But the balance of magic is ever perilous, and for one city to flourish, another London must fall.

I honestly have no idea how to express my feels right now. I'm all over the place. Because that ending.


A Gathering of Shadows picks up roughly four months after Kell and Lila were able to successfully topple the Dane twins of White London. Both Kell and Lila are trying to live their new lives: Kell, who is no longer trusted by his family or anyone in the city, and Lila, who is swiftly climbing up the ranks and finding her place in Red London. As the famous Element Games approach, a competition between three nations composed of battles of the very best magicians, both find themselves in unexpected circumstances, all while something entirely new in White London stirs...


The hero of this book has to be Lila. Lila's survival instincts paired with her ignorance grated a bit on my nerves in the first book, but in this one, they fit seamlessly with the plot. She's no longer in her London, and must make do with no money and no way to communicate with others expect for speaking English, a language only spoken by the royal court. Regardless, that doesn't stop her from doing the unthinkable, and pursuing her dream of being a pirate. Her bravery and slight recklessness worked in her favour, and rather than ending up dead, she outgunned practically everyone she met. Lila's sheer determination and confidence really stood out, proving how strong of a character she is, and how even as a girl, she is equally if not better than most men. Lila's ability for magic is a curious thing in this novel, for Grey Londoners aren't known to have any. But she absolutely mastered it, and I was blown away at her mindset for conquering it. Lila is fearsome, easily likeable, never takes no for an answer, and is definitely one of the strongest female characters I know!

"I am Delilah Bard, she thought as the ropes cut into her skin. I am a thief and a pirate and a traveler. I have set foot in three different worlds, and lived. I have shed the blood of royals and held magic in my hands. And a ship full of men cannot do what I can. I don't need any of you. I am one of a damned kind."

Kell finds himself in a lot less action, and more in the midst of political strings. With the tragedy of the Black Night followed by the resurrection of his brother, Prince Rhy, Kell's life is now directly tied to Rhy's, and whatever pain one feels, the other feels too. As a result, Kell has given up living a life of danger and thrill--one that gave him meaning apart from being the king's pawn--as he doesn't want to do anything that would hurt Rhy. But also means that his magic is growing dangerously restless, and to make matter worse, Kell is being kept under strict guard, no longer trusted by the king. In saving Rhy, Kell has sacrificed both freedom and trust, now reduced to nothing but merely a pawn. We get to see Kell's struggle at the pains of living the one life he avoided, all while knowing that this is all price he willing paid to keep Rhy from dying at Astrid's hands. He's constantly struggling between freedom, fear of hurting Rhy, and the strings of his existence that keep him tethered to the crown. And the ending didn't help, either...


"I did it knowing it would bind our lives, knowing what it would mean for me, what I would become, knowing that the resurrection of his life would mean the end of mine, and I did it anyways, because he is my brother and your son and the future king of Arnes."

One new perspective that we gain in this novel is Rhy's. After the events of the climax in A Darker Shade of Magic, Rhy has a lot going on for him. For starters, his life is now bound to his brother's. Kell gave up everything for Rhy, including his freedom, all which Rhy is painfully aware of. He tries to help his brother the best he can, but is constantly dragged down by the guilt of how restricted Kell is now that their lives are tethered together. We really get to go deeper into Rhy's mind, to explore what lay underneath that charming and friendly prince we were introduced to in the first book, and to understand the difficulties Rhy faced being the magicless heir to the Arnes throne living on a borrowed life that isn't his to live. Rhy, in his elaborate mind of his, is able to create one daring plan to help Kell, to offer him this one chance at forgiveness and redemption for everything Kell has sacrificed and will continue to sacrifice for Rhy. Truly, these two brothers are the picture of what brothers are suppose to be: they fight, they drive each other insane, but when in to comes down to it, they are will to give up anything and everything for one another.


"Kell. My greatest fear in life isn't dying. It's being the source of someone else's suffering. I know you feel trapped. I know I'm your cage. I can't--" His voice broke, and Kell could feel his brother's pain, everything he tried to smother until dark and drown until morning.

***SPOILERS (highlight to read)***
Holland, oh Holland. It's so hard to hate him. He is undeniably a good guy; he helping White London, doing actual good, bringing proper peace to his world after a realm of unsaid terror with the Dane twins as rulers. And the positive changes he's made to White London is undeniably evident: there's greenery, a clear sky, birds, and celebration among the people. It's changing for the better. The only threat to this is Osaron, so it's only natural that Holland would want to pass him off to Kell to get rid of him. To save his dying world by condemning another, one that has yet to face devastation. I feel absolutely terrible for everything that's happened him, for first being bond to Althos, second dying, and third being controlled by Osaron. Holland really deserves happiness. Is there really no chance for him?
***END OF SPOILERS***

The idea of the Element Games threw me off a little at the beginning, as there are numerous books out there with some large game or competition in them. But the author was able to weaved in little oddities into them, creating a new sense of danger for both Lila and Kell. The Games really brought a new sense of Red London, of how intricate the systems were. Everything was detailed, from the welcoming ceremony to the choosing of flags to the actual battle and points system. Everything about it was unique, painting a very different imagine of what you'd normally expect of such games. Forget the Olympics--the Element Games are the ones I would go see!


I truly enjoyed the writing. You could very easily tell who's perspective you were reading, whether it was Lila, with her bold and take-it-as-it-is mindset, or Kell, with his careful and controlled mindset. As with the previous book, the set up for various events or places was unique, easily transitioning between events, humour, and dire situations.

We really get a good look at the world of Red London, get to understand what role magic plays in people's lives. And how in Antari are truly powerful in comparison to the common folks of Red London. Even trinkets can hold bits of magic, objects that we've never considered having double uses. All I have to say is that the author has an amazing imagination, and I would love to spend time in Red London!

Though it took a bit of time for the plot to pick up, the book was offset by the continuous show of character and strength of Lila. Her character could have held this entire book by itself, to be honest. And then ending! I was greatly pleased by the development of Lila's abilities and discovery of who she is (though not confirmed, but it looks like she a you-know-what, and I'd like everyone to note that I totally called it in the last book) and by Kell, finally taking a step in the right direction. The ending is painful, with that right mix of devastation and satisfaction (though devastation generally wins over). All I know is that I'm going to suffer continuously waiting for the next book... Why must it come out next year? Is the agony of the ending not enough? Why add the agony of time? Why? I need to know what happens now!!!