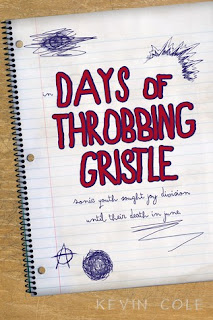 Hi guys! Today, I had the pleasure of journeying through a book as Sam Hay :)

Blurb: (Goodreads)
Does Heaven know you're miserable now?It’s 1987. Sam Henry Hay, a 17-year-old exchange student from Sheffield, hops into Texas, USA, with one burning ambition: Manipulate his gullible host parents into funding his university, and leave his dead-end life in Yorkshire behind.But is Sam manipulating America or America manipulating Sam? The clever lad schmoozes his way into many a bed and purse, yet can’t get rid of anyone. He executes careful plans, only to watch them disastrously fall apart. Worst of all, this once proud nihilist watches in horror as he reveals a conscience, in a world growing ever darker around him.Days of Throbbing Gristle is not your typical teenage tale. It’s a razor-slashing journey through a time and place that really was as bad as you’ve heard. For some, high school is the best time in their lives. For others, it’s a miracle they make it to the other side.

May I be the first to say what an dark and gritty adventure this book as been. I had no idea what I was walking into when I read the first page, and now that I know, my thoughts are just whoa. This is not your typical teenager story; it's far from it. It is a smart, cunning, throat-cutting story with pockets of the reality dangers and risks during 1987.

Days of Throbbing Gristle tells the story of 17 year old Sam, who escapes from his dreadful life in England to Texas, America. His plan? Get an American high school diploma and all while manipulating his host family into paying his future university tuition. Shouldn't be too hard, right? And Sam is exactly the kind of person to do that: he's smart, charming like people expect Englishmen to be, good at school, and he knows how to get on people's good side.

But not everything goes the way he planned it to. American culture slowly starts gnawing away at him, and Sam slowly finds himself on the other side of the fence. Sex, drugs, attitude: we get to see how each and every one of them affect him. Slowly, everything starts spiralling downhill, and the bigger question becomes this: does Sam still have the same goal he did at the beginning, with everything falling apart?

The author brilliantly paves American culture as being a powerful foe. Sam is caught up time and time again with temptation and other sticky situations, some willingly and others not so willingly or expected. Though Sam started out with clear goals of manipulating his host family, the goal becomes muddied as American culture starts to take a hold on him. We begin to wonder: who's the true manipulator here, Sam or America?

Apart from dealing with the dangers of American culture, this book also addresses other issues. Dysfunctional families, clashing religious views, fitting in, coming out as gay, dealing with different types of friends, revenge, everything. Its themes are dark, and they really get you thinking, especially about some of the choices specific characters make.

I particularly liked the deterioration of Sam's host family, the Turners. They begin off as your typical American family, with Mr. and Mrs. Turner thrilled to have Sam staying with them, all while battling with their adolescent and moody daughter, Heather. Sound familiar? You may say yes, but it's far from it. As the plot thickens, we begin to see bits and pieces of how exactly this family isn't really perfect or right. It escalates, and we get to watch exactly how it affects each individual member of the Turner family, until we're left wondering whether there's any hope for salvation for any of them. Or if some of them even deserve it, and if so, who.

There's a striking battle between religious views in this novel. The Turners, or more particularly Mrs. Turner, is strictly against the religious views of Sam's friend, Jill. The whole I-don't-want-you-hanging-around-any-of-those-people bad. Needless to say, Sam doesn't exactly listen, and good for that too, because Jill is an extremely valuable friend. I really liked Jill, as she brought out the good in Sam. Whenever she was there, I felt like things would be okay in the end, even when things ended up south.

We get to see a wide cast of characters and personalities in this book. You have people with different sets of morals, and because of it, they lead their lives in different ways. Sam doesn't just interact with his fellow schoolmates and host family; he gets out, meets people at parties, picks a few fights, becomes associated with people he shouldn't be, and does a few things that probably were best not done. But because of this, we're introduced to tons of people, and their backstories, and it's easy to see the difference between these people. These characters are very well thought-out, and I give kudos to the author for developing such interesting and complex characters.

The issue of being gay is also addressed in this book. Sometimes people come out, sometimes people don't. And for those that do, you have families who are okay with it, and families who aren't. Which means that there's about a 50/50 chance of said person being able to remain the same as they were before. Not everything is easy in the world, after all, and if you do something wrong to the wrong person...well, it might come to bite you big time later on. Which sort of links to the theme of revenge, in the sense that it can have extreme consequences. Something that Sam comes to realize, for better or for worse. (Worse. Definitely worse.)

The ending. THE ENDING. I'm still reeling a little bit. This links back to some choices that Sam made involving Paul. I won't go into too much detail here, but let's just say that a lot of things go down by the end of the novel. It was devastating for me, and it really showed just how far people can fall. I understand why said person did what he did, and I think his actions are very true his character, given all the events he went through. But it doesn't make it any easier to come to terms with what just happened. I'm still in denial that those things happened, because I did not see that coming. Okay, well, maybe I did a little bit, but not all of it. Shock factor is at a 5 for me.

So if you're looking for a dark, gritty, and twisted adventure that will leave you reeling from an emotional roller coaster, then you should definitely pick this book up :)

You can add it to your Goodreads here!
Posted by Erika at 8:19 PM