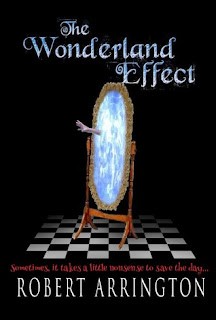 Alice Littleton, gifted with the powers of Wonderland, draws a catastrophe down on herself when she tries to use them in aid of a kidnapped child. Now, she and her father are being pursued by a relentless paranormal intent on recruiting other supers- or eliminating potential competition. She finds her way to Prometheus Academy, a new school with a truly empowered student body. When the school comes under attack, Alice must decide whether to run again, or take a stand against the forces threatening her and her new friends.

Wow. I couldn't put this book down! It was captivating!

This book tells the story of Alice Littleton, who, after her 8th birthday, gains the powers of Wonderland. She keeps her powers secret, and uses them to help others. However, when a rescue attempts results in her discovery by a madman, she finds herself on the run. Turns out Alice isn't the only one with powers, and she ends up at Prometheus Academy, a secret school for empowered people like her. It's the perfect place for her, hidden from both the madman and from the general public. But then the school comes under attack, and things get complicated...

Alice, our main character, has an entire arsenal of awesome powers. She can shrink, she can grow, she can fly/glide, she can talk to animals and insects. Not to mention that she can also summon up any character from Lewis Carroll's Alice in Wonderland story for physical company. The Mad Hatter, March Hare, Cheshire Cat, card soldiers, you name it. Not only are these characters their own people, but they too have their own powers, which Alice can use. For example, the Mad Hatter has time manipulation powers. If Alice wants to change the speed of something, all she needs to is summon the Mad Hatter and ask him nicely for a dose of hyper-speed or slow-speed, and bam, it's done. So in a way, though time manipulation is not directly Alice's power, it's still her power in the sense that she's the one who can summon the Hatter in order to gain access to his powers. Pretty cool, huh?

My absolute favorite power that Alice has is her looking-glass. Her looking-glass, which is a large mirror she can summon whenever she wants, enables her to actually travel to Wonderland. It's like her own private world she can retreat to. And to be honest, who wouldn't want a Wonderland all to their selves? Me, being a huge Wonderland fan, would probably spend days in there, scourging the fantastical world. It's literally paradise to me.

Alice isn't the only empowered person we get to see. We get to see bits and pieces of the other students, and how their powers work. May I be the first to say that these powers are also pretty awesome. Robert Arrington has clearly outdone himself, coming up with fantastic powers I'd kill to have for myself!

The main antagonist himself has a pretty wicked power: he can copy other people's powers. I won't go into detail what he does with that, as it'll spoil the story, but just think of all the evil possibilities he can do if he's able to copy numerous powers...

Prometheus Academy itself isn't really your normal school, either. The assignments that are given out are ones that require the students to actually use their powers to solve, and it all involves discreet interactions with the public. We get to see tons of cool powers and solutions at hand!

I'm one of those people who likes to obsess over the idea that there are superheros living among us. This book is a little like X-Men in the sense that everyone has different powers. But at the same time, the plot is completely different than X-Men. It has a fantasy spin to it, which is really refreshing to read. It was no short on action, which pleased me greatly, and the pace was perfect. I would definitely give this a read if you're fans of superheros, a bit of law breaking (both physical laws and government laws), and, of course, if you're a fan of Wonderland.

This is definitely a new and unique take to Lewis Carroll's Alice in Wonderland story, and I highly recommend it! I really hope there's a sequel, because I would love to read more about this fantastic world!
Posted by Erika at 11:37 AM

Email ThisBlogThis!Share to TwitterShare to FacebookShare to Pinterest
Labels: Arc