My family is in charge of protecting our village.
Protecting them against "trespassers."
Killing them.

My father wants me and my sister to be like him.
To kill without thought.
To kill for entertainment.

I will put a stop to it.
I will save myself and my sister.
Save us from a fate of becoming monsters.

My name is Quinn. 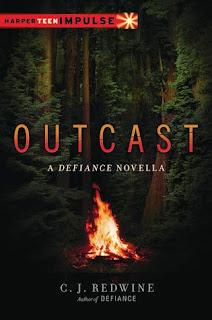 Words can't describe my excitement for a story about Quinn Runningbrook!

Reading: first time
Favorite line: "The questions, the doubts that I've struggled with snap into focus with one clear thought: I will not become the man my father wants me to be. I will choose my own path. My own echoes."
Rating: 5 Stars!

FINALLY. A book about my favorite, favorite, favorite character of the Defiance series: Quinn Runningbrook! I was more than thrilled when I found out that there was a prequel about Quinn. He was easily my favorite character in the series. I just loved everything about him!
If you've read my review on Deliverance (book 3 of the series, review is here), you'll know that I dedicated an entire paragraph on Quinn. Why? Bluntly put, he's the friend and brother we all wished we had. Quinn is sweet, wise, loyal, deadly, protective, everything. When I read Deliverance, I nearly cried my eyes out every time Quinn was there. He is too perfect. Perfect. I need a Quinn in my life, I really do.

Of course, this post isn't about Deliverance. This is about Outcast, which is Quinn's story. Before Rachel and Logan's world got turned upside-down, Quinn's world was equally as painful. From the Deliverance series, we already know that Quinn was raised to be an assassin with his sister, Willow. His father was a cruel man, and killed without a conscious. Outcast takes a look at what that life was like for Quinn, working with his father, killing any who "trespassed" through their village. It explored the internal conflicts Quinn had when dealing with the bloodthirsty man known as his father.

(More under the cut!)


In the original series, readers already get a sense that Quinn has already gone through quite a lot of internal pain, growth, and forgiveness. How else is he able to be the wonderful friend to Rachel he is today? In Outcast, we really get a sense of the constant fear and reluctance Quinn has of obeying his father. His father is corrupt to the extent where he sees killing as a sport. Quinn tolerates it and kills as per his father's orders, but he isn't happy about it. He is reluctance to kill, and it's when the issue of mercy comes up does Quinn launch into a full-on defiance of his father. It shows that Quinn has a strong moral sense, but seeing as this moral clashes with his father's, the result doesn't end up that well.

Quinn questions his identity a lot here. He's always asking why he's killing people. He kills people because that's his family's job, to protect their village. But is that who he really is? Is he to ultimately become the same monster his father is? Why can't he stand up to his father? What will it take to stop him? He can physically stop his father, but can he? How can he save himself and Willow?

This is the part where I talk about Quinn's relationship to his little sister, Willow. She is clearly the luckiest person, having Quinn as her brother. He loves her, and is desperately afraid of her turning into a merciless killing machine like their father. She's a skilled hunter (killer) just like the rest of their family, but unlike Quinn, is a little more obedient. Yes, she too is uneasy about the whole killing scheme, but in the end, she obeys her father. And that scares Quinn, because he doesn't know whether or not she'll ever stand up against him.

Multiple times, Quinn talks about his fear of leaving Willow alone with their father, because if Quinn's not there, it's Willow who takes the blunt of their father's anger. They both do look out for each other, but Willow is Quinn's weakness when it comes to being punished by their father. The simplest way to get to Quinn is to get to Willow, to make her do the unpleasant stuff Quinn won't.

Quinn wants to be free of their father, yes, but he also wants to free Willow as well. He wants them to live a life where they don't have to kill if it's not necessary, to live a good and happy life. Which is why, when he formulates a plan against their father, he plans to get them both out. He will not abandon Willow, and he will not leave her behind to become a monster with their father. And, in return, when caught between choosing to torture the man Quinn is trying to protect verses watching their father kill Quinn, Willow chooses to keep Quinn safe. She'd rather have Quinn hate her over having him dead.

Ladies and gentlemen, that is sibling love. Sibling. Love.

The number of times I simply stopped reading to wail over Quinn is probably higher than 50. And this was only 72 pages long, so that's saying much. Anyways.

The writing of C. J. Redwine is beautiful, and I honestly expected nothing less from her. She is able to capture the indecisiveness, the pain, the longing, the need to be free in those pages. If you haven't read the Defiance series yet, I'd highly recommend it!

Add this to your Goodreads here.
Blurb:
A thrilling, dangerous adventure, this prequel novella to C.J. Redwine’s Defiance and Deception features Quinn, a popular character from the series.

Quinn Runningbrook knows a hundred ways to kill a man and make it hurt. He can track, ambush, and torture his prey with terrifying skill—just like his father taught him. But every kill consumes another piece of him, and Quinn longs to stop, to save himself and his sister Willow from becoming like his father—a man who kills for entertainment.

But when Quinn refuses to torture a group of trespassers caught too close to the Tree Village where his family lives, and instead kills them quickly, he disobeys a direct order from his father . . . and Willow is forced to do it instead. Suddenly, Quinn isn’t the favored apprentice to the family business of “protecting” the Tree Village anymore. Willow is.

When Jared Adams—a courier from the nearby city-state of Baalboden—is caught traveling too close to their borders, Willow is ordered to torture him for information. But Quinn knows that Jared doesn’t deserve torture or death. And he realizes he has to take action…or the fate chosen for Willow and himself by their father will remain carved in stone.
Posted by Erika at 4:42 AM