I am a guilty.
Alone. Broken.
I'm far from fine.

I was trying to kill the Commander.
He took away everything from me.
I ended up destroying my home, Baalboden.

I will find a way to get my revenge.
Even if it kills me.
I will not stop.

The Commander will fall.
And he will fall to the hands of Rachel Adams.
He will fall by my hands. 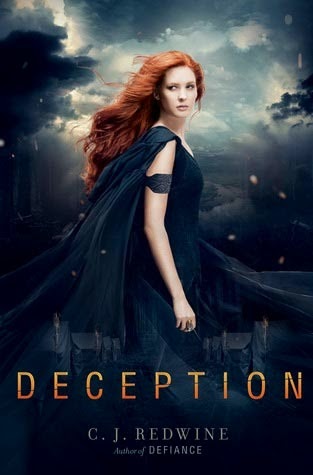 Hey guys! Today, I happen to be the strong-willed, revenge-driven Rachel, from Deception!

Reading: First time
Favorite thing about it: hands down the ACTION. Rachel is deadly.
Rating: 5 Stars

You know, as far as revenge goes, Rachel is about as driven as it gets. She wants justice, and she's willing to do anything to get it, at any consequence. Even laying down her life. Which, of course, is an issue because there are people who don't want to see her die (cough, Logan). Her drive and determinism to seek revenge is exactly what makes her so deadly, so lethal.

Rachel brought me into a world where I became determined to bring the Commander, the man who teared apart my family, to justice. A world where love and loss drives courage and faith, drives vengeance and honor.

The thing about Rachel is that she isn't afraid to get her hands dirty in a fight. Prefers it, in fact. And in the world she lives in, where girls and women are assigned Protectors and are treated as completely helpless, the fact that she can hold up on her own in a fight is amazing. She can easily best any man who would harm her and show him who's boss.

As Rachel, I really got to understand what it means to love someone fiercely, to hold family so close to your heart. She really brought to light the strong love you can have for people and the ends you can go to to avenge them. To love and mourn someone so much that you will do anything it takes to make their deaths not in vain.

But revenge isn't all that Rachel has going on for her. Yes, it's the main driver and motivation for her actions, but she is one of the leaders of the group of survivors after Baalboden was destroyed. She's training others to fight, both girls and boys, all while planning a way to bring the Commander to justice. Plus, she's battling some inner demons, given that the words guilty, alone, and broken keep coming up. She has a lot going on for her, and it really brings to mind both the physical and mental aspects of a strong female.

Rachel is probably one of the bravest females out there. If someone tears apart my family, I would want justice. I want to make him pay for everything he's done to me. And above all, I want to be able to have the courage to seek out revenge and deliver it. It might not be the most logical of decisions, but it is one of most moving, one of the most touching.

How would you guys feel if someone went to such extremes to avenge your death? Grateful? Horrified? Honored?
Posted by Erika at 10:26 PM