I am the mayor's daughter.

The proper daughter that everyone looks to.
But that's just one side of me.

Christmas Eve brought disaster.
My house destroyed, my father taken.
And my Godfather's statue came to life, became a man.

Creatures did this.
I don't know why, or what they want.
But I do know they aren't human.

I will travel to their world, to Cane.
And I will find my father.
I have only until New Year's Eve.

My name is Clara Stole. 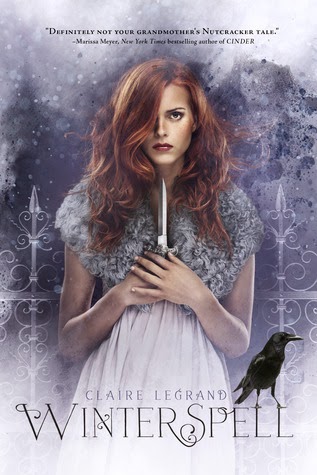 Reading: First time
Favorite line: "You cannot shy away from yourself. Look the world straight in the eye, and it can do nothing to hurt you."
Rating: 4 stars


This is a great holiday read, especially since it's almost Christmas! It's a retelling of The Nutcracker, which is one of my favorite Christmas stories. I got to admit, though, I'm one of those people who never read stand alones. I prefer having more than one book to get to know characters, to watch them grow. That being said, I couldn't resist the idea of The Nutcracker retelling, so this is probably the first stand alone I've read willingly.

Clara is the mayor's daughter, and because of it, she has a reputation to hold so that she doesn't damage her father's imagine. Yes, she's a proper lady and whatnot, but she's also extremely skilled in fighting, both with hand-to-hand combat and with daggers.

Clara is able to keep a cool head, something I really admire. There are multiple times where one of her "suitors" (and by that I mean a really evil kind of suitor) does something not exactly proper to her, and Clara is going through all the ways she could hurt him. But she doesn't; she executes restraint, because she puts her family first. I'm not sure if I'd be able to stop myself from kicking the guy; the temptation for showing the guy off, for letting him know that he is not in control of me, would be too great. And I don't think I'd be very good at putting on a weak facade when I know I'm stronger than that. But that just adds to Clara's strength. Her ability to both downplay and up play herself at the appropriate times makes her a cool and collective thinker. Add that to her amazing fooling techniques when she's in Cane, and you have a pretty awesome person.

Another one of Clara's strengths is her ability to analyze situations, analyze people, and make use of their weaknesses. I won't tell you specifically who I'm talking about, because I don't want to spoil it, but there is one person in which Clara plays to her advantage. She's smart like that, and it actually works in her favor. She can read people, and she knows how to make use of it.

Clara is a very independent person. She doesn't need anyone to make an escape (which she does more than once), meaning that she's good at both planning and following through on her plans without a hitch. And to add, she has some pretty awesome sneaking around skills, which she demonstrates right at the beginning of the book. Sneaky, smart, and independent. That's a good bunch of traits to have.

Christmas. Magic. A semi-freed nutcracker/prince who is under a curse. A smart and brave protagonist, on a mission to save her father and possibly the land of Cane. What could be a better combination for the holidays?
Posted by Erika at 6:53 PM