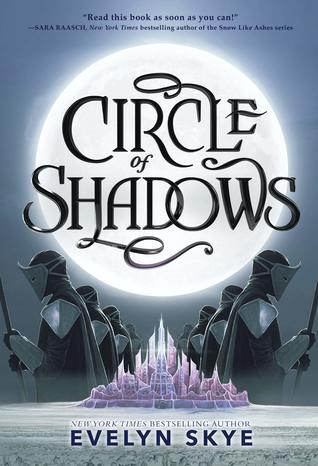 
A thrilling new fantasy series full of magic and betrayal—from Evelyn Skye, New York Times bestselling author of the Crown’s Game series.
Sora can move as silently as a ghost and hurl throwing stars with lethal accuracy. Her gemina, Daemon, can win any physical fight blindfolded and with an arm tied around his back. They are apprentice warriors of the Society of Taigas—marked by the gods to be trained in magic and the fighting arts to protect the kingdom of Kichona.
As their graduation approaches, Sora and Daemon look forward to proving themselves worthy of belonging in the elite group—but in a kingdom free of violence since the Blood Rift Rebellion many years ago, it’s been difficult to make their mark.
So when Sora and Daemon encounter a strange camp of mysterious soldiers while on a standard scouting mission, they decide the only thing to do to help their kingdom is to infiltrate the group. Taking this risk will change Sora’s life forever—and lead her on a mission of deception that may fool everyone she’s ever loved.

I walked in with high expectations...but they fell a bit short, unfortunately. Nothing completely bad, but just not what I had hoped it would be.

I really enjoyed the concept of taigas being warriors selected by the Goddess Luna, and the concept of having a gemina, a partner warrior they share a mental bond with. Their use of magic was original and unique, and I overall enjoyed the Asian inspiration behind everything from the architecture to the sense of duty and honour installed in the warriors.

However, there were a few things that threw me off. First, the names of all the taiga, who encompass about 90% of the mentioned characters. Taigas are assigned names, kind of like military codenames or callsigns. But save the exception of Sora and Daemon, everyone else is referenced by these names. It felt kind of strange when the characters' names were things like "Fairy" or "Broomstick" or "Bullfrog" or "Wirecutter." Even Sora and Daemon, when referred to by people other than each other, were called "Spirit" or "Wolf." It felt like no one really had a real name to attach to their personality.

I enjoyed the concept behind the plot, but I found a few items in the plot a bit lacking. For example, Sora spend about half the book hypnotized (whaaat??), which didn't really build the strong protagonist image I had wanted for her. The magic itself wasn't very well explained, especially the new version that emerges later. I enjoyed Daemon as a character very much, but a lot of things about him were abrupt in explanation. The romance, or there lack of, didn't bother me much...until it suddenly reared its head in a completely unexpected way at the end, and it felt forced. And there were too many other characters' perspectives, some that I felt were a bit unnecessary.

But despite that, I still think the book has a promising plot, and I'm curious to know how it all ends. It's just that everything in between was a bit...lacklustre for my tastes. It's definitely a very different type of book from the Crown's Game, for sure!