Review: The Way of Kings by Brandon Sanderson 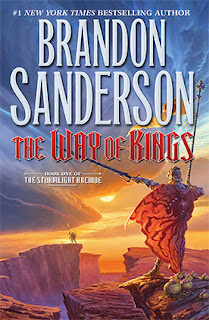 
From #1 New York Times bestselling author Brandon Sanderson, The Way of Kings, Book One of the Stormlight Archive begins an incredible new saga of epic proportion.
Roshar is a world of stone and storms. Uncanny tempests of incredible power sweep across the rocky terrain so frequently that they have shaped ecology and civilization alike. Animals hide in shells, trees pull in branches, and grass retracts into the soilless ground. Cities are built only where the topography offers shelter.
It has been centuries since the fall of the ten consecrated orders known as the Knights Radiant, but their Shardblades and Shardplate remain: mystical swords and suits of armor that transform ordinary men into near-invincible warriors. Men trade kingdoms for Shardblades. Wars were fought for them, and won by them.
One such war rages on a ruined landscape called the Shattered Plains. There, Kaladin, who traded his medical apprenticeship for a spear to protect his little brother, has been reduced to slavery. In a war that makes no sense, where ten armies fight separately against a single foe, he struggles to save his men and to fathom the leaders who consider them expendable.
Brightlord Dalinar Kholin commands one of those other armies. Like his brother, the late king, he is fascinated by an ancient text called The Way of Kings. Troubled by over-powering visions of ancient times and the Knights Radiant, he has begun to doubt his own sanity.
Across the ocean, an untried young woman named Shallan seeks to train under an eminent scholar and notorious heretic, Dalinar's niece, Jasnah. Though she genuinely loves learning, Shallan's motives are less than pure. As she plans a daring theft, her research for Jasnah hints at secrets of the Knights Radiant and the true cause of the war.
The result of over ten years of planning, writing, and world-building, The Way of Kings is but the opening movement of the Stormlight Archive, a bold masterpiece in the making.
Speak again the ancient oaths:
Life before death.
Strength before weakness.
Journey before Destination.
And return to men the Shards they once bore.
The Knights Radiant must stand again.

...Whoa. This book is officially the longest novel I have ever read. 1007 pages! It took me 3 and a half weeks to carve through this monstrosity, which for me, is insane. But those darn pages were way bigger than normal, and the print much smaller, so it took me twice as long to finish. Anyway, onto the review!

Welcome to the world of Roshar. After the discovery of a new nation of people followed quickly by the unsuspecting assassination of one of the kingdom's kings, war has broken out between two nations, lasting seven years in counting. The story follows three main individuals from completely different backgrounds, all who somehow find themselves caught up in the politics of war, scholarship, and survival. One has been newly unjustly branded a slave, another a thief in disguise of a scholar, and the last a highprince who's thirst for battle is waning in favour of a greater purpose.

Where to start? This book is a high fantasy, so a large chunk was world building. I will admit that the book is extraordinarily thorough in describing the complexities of the world: each kingdom (and there are numerous) have their own individuals cultures and traditions, the species of the world is completely different, and the magic system is both simple yet intriguing (though it's clear there's much more depth to the magic system than is explained in the first book). Thoroughly complex, though it was a little difficult to keep track of them at all times. The characters are respectable for their persistence, and it's clear that they've only started their journey into developing into the strong heroes they most certainly will become by the end of everything.

The main focus of the book was on Kaladin and Dalinar. Kaladin finds himself unjustly sold into slavery, and must do his very best to survive the horrible and disposable nature of a slave's fate, all while weathering guilt and hurt form betrayal. Though he eventually does rise back to who he was, I will say that his periodic sulking, especially at the beginning, made it difficult to latch onto until about midway through the book. Dalinar, who is the brother of the assassinated king, plays a more political role than survival like Kaladin. Having recently experiencing visions, he's begun to question the morals and ways the war his kingdom is engaged in are fought. He's trying to do what's right, steer his nephew (the present king) in the right direction, figure out what the visions mean, go into battle when needed, and continue to preserve his reputation as a respectable highprince within the war camps. Total walk in the park, right? Ha!

The governing hierarchical system was very interesting: society is separated by "brighteyes" and "darkeyes," where brighteyes are those with coloured eyes and assume the superior position of ruling and making up the majority of the aristocrat society. Darkeyes, on the other hand, are seen as inferior; they are more traditionally doing the trades work of farming and solider recruits. Though one can rise to aristocracy, they can only go so far within the brighteyes society. However, if a darkeyes wins a Shardblade, the power of the Shardblade changes their eye colour from dark to light.

Speaking of Shardblades and Shardplates, those were the main forms of magic most heavily discussed and emphasized in this book. Though the power of Stormlight and Surgebinding is definitely going to be more relevant in the next few books, the focus of magical powers was through Shardblades and Shardplates, magical objects that grants the wielder incredible power. Shardblades cut through people's essence--they don't harm flesh, but to be cut by one of them is to have that body part rendered useless. I thought that was a very unique and original concept!

Though the book was filled with very original ideas, it did seem to drag on a bit at numerous parts. The world building, though extremely detailed and wonderfully integrated, did seem to slow the pace down every now and then. A lot of the characters are also going through their developments very slowly, if thoroughly. Maybe I'm just not used to such long books? But it still was an enjoyable read for sure, and I'm definitely going to be reading the next book at some point! So for all you fantasy fans: if you're looking for an intricate, well-developed and heavily detailed story and world, take the plunge to brave this tome of a book! I can't promise all your questions will be answered (it is only the first book after all), but it definitely will leave you intrigued!