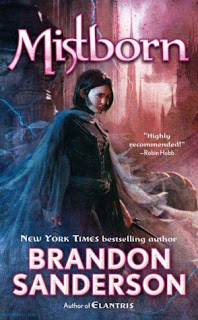 
Once, a hero rose to save the world. He failed.
For a thousand years since, the world has been a wasteland of ash and mist ruled by the immortal emperor known as the Lord Ruler. Every revolt has failed miserably.
Yet somehow, hope survives. Hope that dares to dream of ending the empire and defeating the Lord Ruler. A new kind of uprising is being planned—one that depends on the cunning of a brilliant criminal mastermind and the determination of an unlikely heroine: a teenage street urchin named Vin.
Once, a hero rose to save the world and failed. This time, can a young heroine succeed?

To start off: I received this book from someone rather close to me. Next time I see you, I'm going to strangle you like a squid for this.

This book has to be the longest, most condensed book I have ever read in my leisure time. I'm not joking. It. Is. THICK. Or maybe it's just my copy, since it's a pocketbook version literally bursting with pages of endless lines of text. Or it's just me, unfamiliar with adult-book formats. But I'm adaptive.

There's just so much going on in this world to properly describe the story. The Final Empire is, and has been, ruled by the immortal and powerful Lord Ruler, who oversees two classes of people: the noblemen, who are aristocrats that control the economy, and the skaa, the workers who are treated no better than slaves. In an attempt to overthrow the Lord Ruler and bring equality among the skaa, a criminal mastermind named Kelsier recruits a young street urchin named Vin to join his crew--a girl who is a Mistborn, a rare being who has assess to all the magical abilities Allomancy offers. And so, a game of magic, scams, political manipulation, infiltration, and rebellion begins.

Where to start with the characters? They were all so wonderfully developed. Everyone had so much to learn about from each other. Vin's development was the most drastic, whereas Kelsier's was the most dramatic. For a book of this length, the mission--and thus the overall plot--was cleverly executed, making Kelsier truly worthy of being called a mastermind. It combined fast-paced action with tension-filled political intrigue, all building up towards an epic finale.

For Vin, her life changes completely when Kelsier selects her to join his crew, revealing her latent Mistborn talents and teaching her how to use them. Vin grew to become such a strong character; her development as a person wasn't limited to just her personality, but to her morals as well. She goes from surviving life to living life, from being submissive and quietly resentful to bold and active, from being powerless to being powerful. Her confidence and sense of belonging were key markers to her growth as a character, slowly changing her into a strong and powerful individual.

"You keep telling the others what an advantage it is to have two Mistborn on the team. Well, it's not going to be much of an advantage unless you actually let me be a Mistborn."

Allomancy is the amazing magic system in this world, where individuals gain powers through the ingestion and "burning" of metals. There are 8 main ones, where the burning of each metal gives the user specific abilities (burning pewter enhances physical strength, iron pull metals towards you, brass dampers other peoples' emotions, etc.). However, not everyone is an Allomancer, and Allomancers generally can only burn just one of the 8 metals for their entire lives. Mistborns are the exception to this rule: they have the ability to burn all 8 metals, giving them access to the entire pool of abilities the metals have. Needless to say, this makes them extremely dangerous and powerful, and are rare among Allomancers. My favourite part of this system were the burning of iron and steel, which allowed Allomancers to "Push" or "Pull" metals, which is an alternative way of saying attracting and repelling, aka magnetics. So ultimately, the Mistborn's abilities to fly are actually a form of advanced magnetics, using a combination of metal properties and Newton's third law of physics laws to "fly." It's basically science, which made it pretty cool!

How I loved Kelsier. Kelsier was a true mastermind, bringing together a group of highly skilled thieves to work towards overthrowing the Lord Ruler. His plan was by far ambitious, but the firm belief in the rightness and justice of their actions was enough to keep the plan moving forward, reaching new heights no one ever imagined it would reach. Plus, Kelsier's personality helped: he was ever so charismatic, regardless of the situation. Add to the mix his intelligence, constant scheming, and Allomantic abilities, Kelsier was practically invincible. He was always formulating some sort of plan to continue to chip away at the Lord Uler's defences and resources, always putting the skaa's liberty first and foremost. He put the future in motion for the skaa.

"This isn't about boxings or glory. This is about war--a war we have been fighting for a thousand years, a war I intend to end.

Though the book did lag a smidge in the middle, the final 20% literally flew by with all the twists (I counted 3 twists, and they were CRAZY). Overall, this book is an imaginative ride, with so many intricate aspects and plot lines to complete the story. It detailed the process of both raising an army and a rebellion in secret, along with infiltration of the higher class. Everything was high-stakes, with devastation and assassination never far from mind. The characters were all properly fleshed out, which really let you connect to them, especially since a lot of their thinking process paralleled the readers'. There definitely was a lot going on in this novel, given the length, and it all ended up very nicely, discreetly hinting at the future conflicts to come in the next books. I'm excited to see what becomes of the Final Empire next!