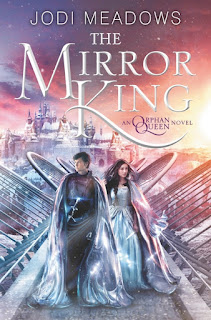 
Wilhelmina has a hundred enemies.
HER FRIENDS HAVE TURNED. After her identity is revealed during the Inundation, Princess Wilhelmina is kept prisoner by the Indigo Kingdom, with the Ospreys lost somewhere in the devastated city. When the Ospreys’ leader emerges at the worst possible moment, leaving Wil’s biggest ally on his deathbed, she must become Black Knife to set things right.
HER MAGIC IS UNCONTROLLABLE. Wil’s power is to animate, not to give true life, but in the wraithland she commanded a cloud of wraith mist to save herself, and later ordered it solid. Now there is a living boy made of wraith—destructive and deadly, and willing to do anything for her.
HER HEART IS TORN. Though she’s ready for her crown, declaring herself queen means war. Caught between what she wants and what is right, Wilhelmina realizes the throne might not even matter. Everyone thought the wraith was years off, but already it’s destroying Indigo Kingdom villages. If she can’t protect both kingdoms, soon there won’t be a land to rule.
In this stunning conclusion to THE ORPHAN QUEEN, Jodi Meadows follows Wilhelmina’s breathtaking and brave journey from orphaned criminal on the streets to magic-wielding queen.

I have waited an agonizing long time to read this book, and have finally picked it up!

This book picks up mere seconds after that traumatic ending in The Orphan Queen. Wilhelmina's hidden identity as the princess of Aecor has been revealed to the Indigo Kingdom, straining relationships with friends new and old. Trapped in the enemy kingdom, Wil must find a way to reclaim her crown peacefully, stop an rebellion acting in her name that she did not authorize, and work with the leaders of the other kingdoms to battle the impending wraith that threatens to destroy the everything...

13 pages was all it took for me to realize just how much I love Wil and her personality. She was brilliant, evading questions with clever and snappish answers. Her unwillingness to share her plans made her conversations very fun to read, constantly redirecting the attention to other matters. I can only imagine how infuriated other characters were in their failure to make Wil slip up and obtain information for their own personal means. Wil also really tackled what it meant to be unprepared to become queen, and how to deal with people acting violently on her behalf. From the wraith boy to Patrick Lien, she was forced to learn chose whether to let others make decisions for her on the assumption that's what she would want, or if she would get her own desires with her own hands.

"I didn't want it to happen, but it did, and because the wraith boy is supposed to be under my control, I need to accept responsibly."

Regardless of Wil's secret identity as the princess of Aecor being revealed, she still managed to take up another secret identity as the new Black Knife vigilante. Much like in the last book, Wil wasn't afraid to go into the city and actually experience how the kingdoms were faring, acting as a vigilantes to fix things she saw. Though there wasn't as much time of her nightly activities as a vigilante as I would have liked, I am still glad that essential part of her wasn't stripped away completely with true identity being revealed.

And then we have Tobiah Pierce, aka the Crown Prince of Indigo Kingdom. Given the devastating events of the last book, I was ready to carve my heart out if it meant I could save him. Needless to say, and I don't think it's that big of a spoiler, Tobiah lives (hooray!). Tobiah really segregates himself Black Knife in this book, stepping up in the role as king. He was often caught between protecting his kingdom from the wraith and trying to help Wil reclaim her crown, which really showed how much both his kingdom and his friends meant to him. We also discover a rather small (or big, depending on how you look at it) secret of his, which I did not see coming at all. Though if I'm going to be honest, the revelation it did feel a bit sudden, and I was uncertain if it merely was introduced as a means to an end for the sake of the plot. I would have liked the new revelation to have stretched a bit more out, and to better understand Tobiah's own feelings towards it. Regardless, he still remains to be one of he best kings I know, always putting the people first and going first-hand to experience what they're going through in order to better his rule. I would definitely live in a kingdom ruled by Tobiah any day!


"Hundreds of years ago, kings and queens rode into battle with their people. Now when there's danger, monarchs are shuffled away, too precious to risk breaking. But what makes us leaders if we don't lead?"

I do think there were aspects of the book that should have been fleshed out a bit more. There was a lot of focus on the wraith boy in this one, which is understandable since he represents such a new and unpredictable source of destructive power. But his transformation was what really intrigued me, especially how he seemed to grow more human. I would have liked just a smidge more on him, to determine whether or not he truly was capable of being human. Similarly, there was one part with James (and if you've read the book, you'll know what I'm talking about) that felt so...sudden. I really would have liked James' condition have been introduced earlier in order to be explored more before the end of the book came, but oh well.

Politics definitely play a larger role in this book, with Wil now actively and directly trying to claim her crown. Prince Colin was a definite creep and a worthy political adversary for Wil, constantly testing her to find weak points to use against her or blackmail. Thankfully, Wil held her ground, but I swear, there were so many points where I would have just said "screw it" and stuck a dagger in him. Needless to say, I don't have a head for politics, so it's kind of a good thing I'm not in Wil's position!

All in all, this book had exactly what I wanted to see from the characters. The plot dipped into the realm of politics more than I liked and had a few sudden revelations that could have been more developed, but I still enjoyed it. It really speaks to the whole "putting on a mask" notion, which I'm grateful for!


But not now. Not this time. These people needed me, Wilhelmina, not my impersonation of what I thought a queen should be.