Review: A Torch Against the Night by Sabaa Tahir 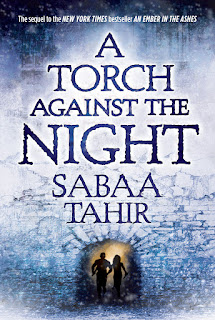 
Elias and Laia are running for their lives. After the events of the Fourth Trial, Martial soldiers hunt the two fugitives as they flee the city of Serra and undertake a perilous journey through the heart of the Empire.
Laia is determined to break into Kauf—the Empire’s most secure and dangerous prison—to save her brother, who is the key to the Scholars’ survival. And Elias is determined to help Laia succeed, even if it means giving up his last chance at freedom.
But dark forces, human and otherworldly, work against Laia and Elias. The pair must fight every step of the way to outsmart their enemies: the bloodthirsty Emperor Marcus, the merciless Commandant, the sadistic Warden of Kauf, and, most heartbreaking of all, Helene—Elias’s former friend and the Empire’s newest Blood Shrike.
Bound to Marcus’s will, Helene faces a torturous mission of her own—one that might destroy her: find the traitor Elias Veturius and the Scholar slave who helped him escape…and kill them both.

It has been ages since I've read such a well-thought out book like this. And I absolutely mean it.

This book picks up right on the heels of the first book: Laia and Elias have managed to escape Blackcliff, Martial soldiers chasing after the two fugitives as the entire city falls apart. Their destination is Kauf, the most secure prison in the Empire, where Laia's brother is locked away. Their perilous and fugitive journey is made worse by one of the people charged by the new emperor to hunt them: Helene, whose loyalty to Elias is tested against her loyalty to the Empire as its newest Blood Shrike.

There definitely was something about Laia in the first book that marked her as a bit different. We get to see a bit more solid proof of her otherness, this time noticed not just by readers, but by herself and other characters. I didn't find her as active as she was in the last book, but she was still enjoyable to read about.


"To fix this mess, I need a thousand things to go right. The distance between one bit of luck to the next feels as great as the distance across oceans. But, I decide in this moment, I will bridge that distance, again and again, until I win. I will not fail."


Elias! I still loved him in this book, though he was both more somber and desperate. He still was battling guilt, but it was done in a completely different way, this time involving ghosts. Though technically, I guess wouldn't really classify him as dealing with guilt in this one, but there was just this great big sadness hanging over him that made me want to hug him.


"Don't you see? So long as you fight the darkness, you stand in the light."


The character in this book that really stole the spotlight was Helene. I absolutely loved her. As Blood Shrike, she is bound to follow the emperor's will, to be his right-hand man and assassin. So she has absolutely no choice but to hunt Elias, which really tested both her loyalties and her feelings, especially when her family got thrown into the mix as "incentive." My god, did she have to make some tough calls. I have complete respect for her, after everything she's done and everything she's been through!


"Most people," Cain says, "are nothing but glimmers in the great darkness of time. But you, Helene Aquilla, are no swift-burning spark. You are a torch against the night--if you dare to let yourself burn."


The plot was enticing and pacing fast and gripping, just the way I like my stories. Even though a lot went down, this story is still just getting started with some new revelations. So many other characters have yet to come into full play--Quinn, the Nightbringer, Darin, Tas (I hope), Harper (HARPER! THAT TWIST!)--so I'm really looking forward to reading the next book! If the previous books have been any indication, it's going to be absolutely amazing!