Review: The Sun Is Also A Star by Nicola Yoon 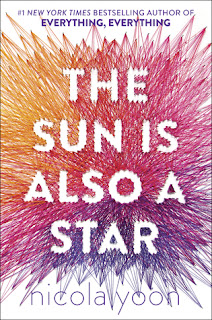 
Natasha: I’m a girl who believes in science and facts. Not fate. Not destiny. Or dreams that will never come true. I’m definitely not the kind of girl who meets a cute boy on a crowded New York City street and falls in love with him. Not when my family is twelve hours away from being deported to Jamaica. Falling in love with him won’t be my story.
Daniel: I’ve always been the good son, the good student, living up to my parents’ high expectations. Never the poet. Or the dreamer. But when I see her, I forget about all that. Something about Natasha makes me think that fate has something much more extraordinary in store—for both of us.
The Universe: Every moment in our lives has brought us to this single moment. A million futures lie before us. Which one will come true?

From the format this book was written in to the diverse cast of characters to the cleverly interweaved topics it addressed to the ending--it was as unique as I expected a book by Nicola Yoon to be.

This book features two characters, Natasha and Daniel, two complete strangers and completely different people that, through pure coincidence, bump into each other one day. But it's not that simple--Natasha is facing deportation as an undocumented immigrant and is trying to do everything she can to fix it, and Daniel is facing a future already pre-set by his parents that he wants nothing to do with. Their lives are all hanging on this one day, the same day that they meet--the same day that sends them both through a spiral of events and discovery of themselves, their families, and life.

Natasha and Daniel were about as different as they came. Natasha was the logic girl, everything deductible with science and data from emotions to statistics. In contrast, Daniel was the complete opposite, a dreamer who followed intuition as much as possible. I definitely liked Daniel better than Natasha. Though Natasha was good, I just connected to Daniel more for a numerous reasons: he was a hopeless romantic, a poet and dreamer, a guy who felt things and acted on it, and had the the whole constant Asian-parent-pressure baring down and restricting his choices. I just saw so much of me in him, and just felt like I understood him, that he could understand me. He just saw the world as a place filled with possibilities, a place he could always keep chasing his dream.

"We are capable of big lives. A big history. Why settle? Why choose the practical thing, the mundane thing? We are born to dream and make the things we dream about."

At first, I didn't really see how Natasha and Daniel could have worked. They just seemed too different. And though things (or the universe allowed) things to align, I wasn't completely convinced they would work on a logical point of view. But regardless, as I am a hopeless romantic, I fully believe in the ability to overcome differences for the name of love. Does that make me an idiot? Probably. But at least I'm an idiot that sticks to her guns, sappy or not!

I really loved the different chapters in this book. You had the normal chapters from both Natasha and Daniel's point of view, but you also had glimpses into other seemingly filler characters' lives by looking through their perspectives too. And it really shows how everyone has their own story to tell. The security guard that doesn't smile? There's a reason. The seemingly rude comment a waitress made? Also a reason. There also were small chapters about the history of something mentioned by Natasha or Daniel to give a bit of context, as well as some definitions as they applied to the plot that were given. It really felt like the narrator was the universe, where everything was explained from science terminology to theories of multiverses, and how everything was aligning up just so specific things would happen to people. There are a thousand possibilities and universes, and we're all living in different ones.

"Sure, but why not poems about the sun? The sun is also a star, and it's our most important one. That alone should be worth a poem or two."

THE ENDING. I don't really know how I feel about it. On one hand, it's realistic and cute, but on the other, I find myself questioning once again just how things are going to work. But what was also neat was how the ending took Daniel and Natasha's story and transformed it into Irene's story. So maybe this book wasn't just about them; maybe it was about Irene all along, and how something amazing that happens to two people can happen not just for them, but for someone else. And it's kind of comforting thinking about that in a way, when the hardships one endures to make it to their destination actually not only helps them, but saves someone else. Or, in this case, saves someone's life.

Overall, this is a neat book with a cute love story, one that kind of leaves you in an agonizing place for various reasons. There are social issues touched upon in this book, including glimpses into different cultural expectations, which I really appreciated. I definitely learned some cool trivial science facts, which doesn't happen often, and quite neat. It really makes you think about the world differently--what small, seemingly insignificant thing is going to start a chain of events? How will reading this book affect me in the long run? Am I living in a universe where reading this book will affect something I do in the future, or am I living in the universe where it won't? So many great questions to ponder about!