Review: A Darker Shade of Sorcery by William Collins 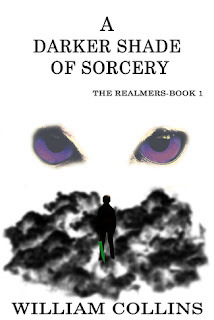 
The lonely and grieving Evan Umbra is the newest Venator to enter Veneseron, the school for demon hunters.
A Venator is a wizard, a spy and a demon hunter rolled into one. They’re taught how to wield their sorcery and enchanted weaponry by orcs, elfpires and aliens alike.
Their missions range from battling monsters and saving countless lives in the multiple worlds, to the more peculiar, like wrangling killer unicorns and calming down drunken yetis.
In their free time Venators enjoy goblin soap-opera’s and underwater bubble travel, but they also understand that every new mission they’re given could be their last.
Whilst learning how to manipulate the elements, summon magical creatures and shoot Spellzookas, Evan meets a girl who makes him feel nauseous; but in a good way.
He makes the first friends he’s ever had in the carefree Jed and the reckless Brooke. Whilst Jed gets on the wrong side of a rival Venator, Brooke finds herself falling for the enigmatic demon hunter who brought her to Veneseron, not knowing he isn't quite human. But it soon becomes apparent that Evan is more than just a Venator. Everyone wants to kill or capture him, from demons to Dark-Venators and even people he’s supposed to be able to trust.
Evan reckons he probably won’t survive his first year at Veneseron.


**I would like to thank the author for providing me with a copy. This does not affect my review in any way.**

With all the numerous fantasy and sci-fi worlds and ideas out there, I've always wanted a story that incorporated everything just to see how all the different paranormal species would get along. And in this novel, we get everything, from humans to elves to vampires to aliens to orcs and everything in between, pushing my imagination beyond what I originally expected. Add in the fact that they're all demon hunters serving a duty to protect the various realms from evil, get awesome enchanted weapons, and learn magic and sorcery? Sign me up please!

This story stars Evan, a lonely boy struggling to find his place in the world after his grandmother dies. Life has little joy for him, with his new home at the orphanage. But after being kidnapped by demons and rescued by a person with no abilities normal humans can possess, he discovers he's a Venator: a demon hunter with the aptitude for sorcery. Brought to Veneseron, the training academy for demon hunters from numerous worlds, Evan begins to learn about his growing powers in magic, sorcery, and combat. But too soon, demons infiltrate the fortress of Veneseron, with one clear target: Evan.


Evan began the story rather meek and pathetic, unable to stand up for himself, let alone others. But once he entered Veneseron, his character slowly changed, becoming for confident in himself and gaining friends. His character didn't diverge much from the typical hero and "Chosen One" character arc, and I would have liked to see a bit more complexity to his character, but I still enjoyed reading about Evan and experiencing the trials of becoming a Venator through his perspective. I'm hoping he becomes a great hero not merely through heroic acts, but also by prevailing through mental challenges.

I found Brooke more complex than Evan, and as a result, liked her better. Her role in the plot was unclear until the ending, but that gave me the opportunity to see Veneseron through a clear lens, without the sense that there was something ominous waiting for her in the shadows. As she wasn't tied down by any prior expectations of being a chosen one, her character was both more unpredictable and fun to read about. Brooke's struggles weren't just with grappling with magic; her different relationships with other characters such as Elijah, Lyella, Lok, and Arantay really added to her character. The reveal at the end was something I didn't anticipate, but I'm looking forward to seeing how it will affect her, and to see how she handles it!

I did feel that the plot lagged a bit in the middle of the story. There seemed to be more detail regarding the daily occurrences and customs at Veneseron rather than plot in the middle section. Though it gave me a greater understanding of how all the worlds worked, I think it would have been more beneficial if the information was directly used to further advance the plot instead just of world building.

There was a good balance between Evan's perspective and Brooke's. I particularly liked how smooth the transitions were from one to another at the very beginning when they both were being rescued, recruited, and brought to Veneseron. There was a bit of Jed's and Arantay at the end, which did throw me off, but I'm hoping means they'll be playing more crucial roles in the next instalment.

The final reveal at the end was both expected and unexpected. I anticipated Evan having some kind of important role being the Chosen One of the Kurrlan, but was pleasantly surprised to find out that the plot wasn't going to be centred solely on him. This discovery was a good catalyst to set off the events of the next instalment, now that I know everything is a lot bigger than what I originally thought it was! I'll be looking forward to seeing what new elements the author will bring into the series!