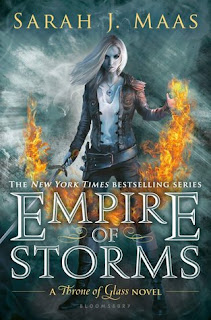 
The long path to the throne has only just begun for Aelin Galathynius as war looms on the horizon. Loyalties have been broken and bought, friends have been lost and gained, and those who possess magic find themselves at odds with those who don't.

With her heart sworn to the warrior-prince by her side, and her fealty pledged to the people she is determined to save, Aelin will delve into the depths of her power to protect those she loves. But as monsters emerge from the horrors of the past, and dark forces become poised to claim her world, the only chance for salvation will lie in a desperate quest that may mark the end of everything Aelin holds dear.

In this breathtaking fifth installment of the New York Timesbestselling Throne of Glass series, Aelin will have to choose what—and who—to sacrifice if she's to keep the world of Erilea from breaking apart.


Hello epic series. I'm not kidding. I have no idea why I didn't pick this up sooner. Because this. Book. Was. Amazing. I honestly don't know where to begin!

This book picks up on the heels of the last book. Aelin is heading back to Terrasen, hooray! But nothing is ever easy, especially since there are forces are gathering, readying for war. And caught in the middle of everything also happens to be trying to find a way to stop Erawen for good--a monumental task with still so many missing parts and knowledge

And of course, in the centre of everything is Aelin. She was just as brilliant and masterminding as the last book--more so, since she was no longer playing games to mostly her own benefit, but a game of hard, cold war. From raising armies to quietly overthrowing cities already claimed by Monarth to plotting ahead for her kingdom's future and making schemes in anticipation for awry plans, she was a queen in composure. But what I liked was that she was properly balanced in this book: she was smart, but also vulnerable, recognizing the consequences each action would have. A queen that bares the weight of the world and her kingdom on her shoulders, reluctant to share the burden in fear of straining her court. Pride to the point of insane selflessness, hidden under the mask of selfishness.

Now, one interesting character that I have grown to become surprisingly fond of is Lorcan. I know, I know: Lorcan. Cold, ruthless killer of a guy. But if you've read Empire of Storms, you'll know why. And you'll know why I ship with someone. Though I remain conflicted as to whether I want him to live or die yet. I mean, I wouldn't mourn his death too much...right?

One thing I loved about this book is that at one point, we have the entire cast and crew all together in one spot, fighting. On the same side, I might add! I've been waiting and waiting for these heavily politicized characters to finally come together and kick some butt! Hooray! But alas, I fear that this is probably the only time it will happen, as it's a lot of characters to keep track of and also the war (there will definitely be a war in the next book) needs to be fought on numerous sides, meaning not everyone can be together if they're going to win. But still, I really loved reading about them all combining forces! So epic!

Oh, the ending. Yet another clever scheme by Aelin, one that resulted in a twist of devastation that I did not see coming. So many unexpected twists in general in this book! From character twists to plot twists to schemes, it all built up for that one ending. Glorious, yet devastating. Argh! Poor Rowan. But also hooray for Lysandra!