The Rise of the Dawnstar Blog Tour: Review, Interview, and Giveaway!

Hi guys! Welcome to my stop of The Rise of the Dawnstar blog tour. I'm so happy to be a part of it! My stop will feature an interview with the fantastic author Farah Oomerbhoy herself, plus a review. And there's a giveaway at the end! Tons of cool stuff for you all just waiting to be read ;) 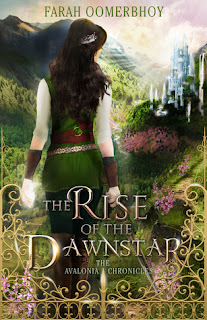 Aurora Firedrake returns in the spellbinding sequel to The Last of the Firedrakes.
The seven kingdoms of Avalonia are crumbling and evil is spreading across the land like a plague. Queen Morgana is close to finding a way to open The Book of Abraxas and it’s only a matter of time until she uses the power trapped inside its pages to enslave the entire world.
With Avalonia growing more dangerous by the day, Aurora must travel through war-torn lands and deep into the heart of the fae kingdom of Elfi. Her goal is to find a legendary weapon infused with the last of the realm’s ancient magic—the only weapon in the world powerful enough to stop the queen.
Aurora might have survived her first battle against Morgana, but the true fight to save her kingdom and restore her throne has only just begun…


Think the first book was good? This book is better.

The Rise of the Dawnstar picks up right where The Last Firedrake left off. Aurora, accompanied by Rafe and Kalen, continue their quest to find a way to reclaim Aurora's throne and to stop Morgana from conquering all of Avalonia. Rumours of a legendary weapon created eons ago has surfaced, and if Aurora wants any chance of defeating Morgana, she will have to find it before Morgana catches up to her.

This book is literally the most perfect and classic fantasy story. Accompanied by such descriptive writing, the story appeals to all us lost souls who desperately want a chance to be someone special in another world. Everything is offset well with the lavishes and pampering of being a princess along with the combat and action that comes with fighting for one's rightful crown. Gods, how I wish this were me.

Aurora became everything I wanted her to be in this book. She began off still rather timid and quite girly for the first half of the book, a reminder of how new everything still was to her, but then grew expectionally in both confidence and determination in the latter half. There was just so much growth from her; knowledge of the world, knowledge of politics, knowledge of her fighting powers, knowledge of herself and the her lineage. We also got to see her confidently wield both magic and weapons in battles, which very much pleased me!

"In this fae land, under my grandmother's rule, I was an outsider, a half-breed, someone they looked down on. In Elfi I was not a princess, I was a warrior who had a task to do, and I would not back down."


The world has definitely expanded as Aurora continued her travels. In particular, we're introduced to the kingdoms of Emir and Elfi, along with some of their occupants. I absolutely adore the new cast of characters, in particular the ones in Elfi. Though I was hesitant on a few of them and the ideologies the fae lived by, I very quickly warmed up to the society. In particular Tristan. Tristan, who deserves an entire separate paragraph on him.


Tristan Nightshade has very well stolen my heart from Rafe. He began off as an extremely prickly character, very cold towards Aurora for her existence as a demi-fae (half mage, half fae) much like the rest of the High Fae in Elfi. But even in the stages of his dislike for her, he still demonstrated that he cared for her well-being. But as soon as he began warming up to Aurora and cracked a few jokes, my heart was lost. Did I mention he's part of the Elite guard? Fights with fae-fire swords, a skill only the most advanced warriors can do? And he's a (minor spoiler) prince? I don't care if Aurora wants him or not. I'll take him, thank you very much ;) But for all you Rafe fans out there, don't worry, he's still around and has equal hold over Aurora as before.

Though I did find the beginning of book very similar in atmosphere to the first book, with Aurora still emotionally dependent on others and continuously surrounded by balls (not complaining--I myself am a sucker for balls or masquerades or basically any chance to dress up super fancy and dance with dashing gentlemen), the latter half with her individual journey definitely make for an extremely exciting and engaging read. Though some parts of the plot were a bit predictable, other parts were less so and took me by surprise. Aurora's break away from the original characters is definitely what Aurora needed in order to toughen up quickly and learn to be completely independent. Her growing mastery over her powers and revelation of new ones made the story so much more intriguing than the first book!


"Aurora Darlington was gone. Nothing in the world was going to change that. I was Aurora Firedrake, and I was born to be a queen. "


I knew I had stumbled across something good when I first picked up the first book (I mean, one look at the gorgeous covers and I knew), but this one just knocks the first book out of the sky. I loved the character development, the expansion of the world, the new revelations of magical items and characters, everything. Plus, did I mention there are dragons in this book? Dragons! How's that for raising the excitement level? DRAGONS!!! I absolutely cannot wait to see what the author does next--whatever it is, it's going to be absolutely epic!


1. Hi Farah, and welcome to my blog! I’m a big fan of your first novel, The Last of the Firedrakes, and am extremely thrilled to have you here today. To start off, can you tell me a bit about your writing routine?

Thank you for hosting me on your blog today. Glad to be here.
Now that I am writing full time, I try to stick to a routine. But it does tend to get difficult at times since I have 3 kids.
When I write a first draft, I usually end up writing for at least 6-8 hours a day, and don’t stop until I’ve finished my minimum word count for the day. The best time to write is in the mornings when ideas are fresh, and the kids are at school.

There was a time when I used to write at night, after the kids were asleep, but I found it never produced my best writing because I was too tired to think properly. So now I spend time at night outlining the story and writing notes by hand, which will then be put down properly on the computer the next morning.

2. Will there be any new major characters we can look forward to meeting in the second book? Or perhaps any side characters that will be playing larger roles?

There are going to be quite a few major new characters in The Rise of the Dawnstar, and all of them are important to the overall story. Lookout for Tristan. :)

3. What was the major difference between writing the first book and the second?

I think with the second book I found it easier to write, because I knew where I was going. The world is set up and so are the characters, everything is so real in my head that writing it just seems so comfortable.

4. Your covers are gorgeous! How did you get such stunning covers?

I envisioned the covers and knew exactly what I wanted them to look like. Luckily I found a great cover designer, Scarlett Rugers, who managed to recreate the vision I had in my head. I love the covers too!

5. Do Aurora or Rafe have any secret guilty pleasures?

Well Aurora does have a sweet tooth as you can see in the books. And Rafe, well, he’s a little too secretive to let us know what his guilty pleasures are ;). We will just have to guess.

6. How do you come up with the titles of your novels?

7. Final question! Your writing is so descriptive! Where do you draw your inspiration from for the foods, the dresses, and the rooms mentioned in the story?

I think this stems from the books I read as a child. One of my earliest memories of reading a magical book, was Enid Blyton’s Faraway Tree series. The food in those books always made me hungry and the descriptions were so vivid that I felt like I was right inside the book with the characters. I wanted to recreate some of that feeling in my novels and that’s where the inspiration comes from. I hope I managed to do justice to it.

For each stop on tour, there will be a special number at the end of the post. Collect all the numbers, add them up, and enter to win one of three prizes! Once you have all the numbers you can enter the giveaway here: http://farahoomerbhoy.com/rise-dawnstar-now/ 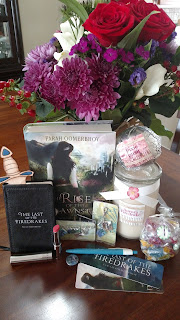 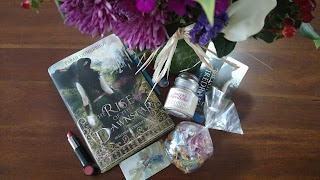 Farah Oomerbhoy is the international bestselling author of The Avalonia Chronicles. Her first book, The Last of the Firedrakes, was originally published on Wattpad where it gained over two million reads and a Watty Award. Since publication, her debut has gone on to win a silver medal in IBPA’s Benjamin Franklin Awards and the Readers’ Favorite Book Awards, along with winning a finalist placement in the USA Best Book Awards. Farah loves the fantastical and magical and often dreams of living in Narnia, Neverland, or the Enchanted Forest. With a master’s degree in English literature from the University of Mumbai, Farah spends her creative time crafting magical worlds for young adults. She lives with her family in Mumbai, India.


The Rise of the Dawnstar is Available On:

***Don't forget to check out the rest of the blog tour stops!***