Review: A Million Worlds With You by Claudia Grey 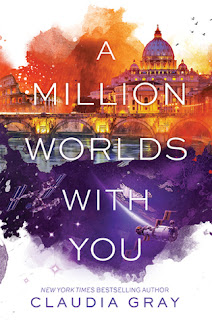 
The fate of the multiverse rests in Marguerite Caine’s hands. Marguerite has been at the center of a cross-dimensional feud since she first traveled to another universe using her parents’ invention, the Firebird. Only now has she learned the true plans of the evil Triad Corporation—and that those plans could spell doom for dozens or hundreds of universes, each facing total annihilation.
Paul Markov has always been at Marguerite’s side, but Triad’s last attack has left him a changed man—angry and shadowed by tragedy. He struggles to overcome the damage done to him, but despite Marguerite’s efforts to help, Paul may never be the same again.
So it’s up to Marguerite alone to stop the destruction of the multiverse. Billions of lives are at stake. The risks have never been higher. And Triad has unleashed its ultimate weapon: another dimension’s Marguerite—wicked, psychologically twisted, and always one step ahead.
In the conclusion to Claudia Gray’s Firebird trilogy, fate and family will be questioned, loves will be won and lost, and the multiverse will be forever changed. It’s a battle of the Marguerites…and only one can win.

I don't know, maybe because I'm coming off of reading a lot of Sarah J. Maas and Brandon Sanderson (both with super complex plot lines, characters, and themes), but this book just read a bit...childish to me.

Don't get me wrong--I absolutely loved loved loved all the creative universes in the book! Some of them were old favourites, other ones completely new. We got to explore so many difference scenarios, and it was just as interesting for Marguerite to learn who she and the rest of her family and friends were in each world. Even more interesting was with her re-visiting some old worlds, and actually interacting with other hers from worlds she's previous visited. So that part remained to be as fascinating as the first two books!

But I found that there were a lot of loose terms and references being thrown around without much substance to it. Fate and destiny were the big ones I kind of felt weird about, especially since Marguerite was trying to convince she and Paul were meant to be, that it was their destiny. However, given the fact that they're living in and experiencing the multiverse theory, then there also would be an infinite number of universes where she chooses someone other than Paul--more than the set number where she does choose him. So a slight contradiction that left me puzzled. Also, there was a lot of talk about building stabilizers and programming the Firebirds to be able to pick up on one's resonance in order to track them through the universes, but the rest is vague. I understand that the science it impossible (I think) and thus difficult to explain, but it would have been nice to have some better explanation other than it just happening.

The ending wasn't exactly as climatic as I would have liked it to be. Rather, I found it was more so a...resolution. It wasn't as dramatic as I feel like it had the potential to be. But don't get me wrong--the set up for the climax was perfect, with high stakes and everything. But the direction the story ended up going to solve it...ehhhh.

In regards to character arcs, Marguerite didn't quite go through as much of one as I've been hoping she would. For Paul, I found his completely unresolved, with no proper explanation of how he jumped from the middle stage of his character arc to the very end.  So...a bit confused.

Overall, I thoroughly enjoyed the different worlds that Marguerite goes through, and just the sheer wonder of all the possibilities. But as for the plot and characters, I just feel like it could have gone a bit farther!