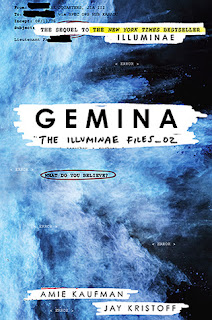 
The highly anticipated sequel to the instant New York Timesbestseller that critics are calling “out-of-this-world awesome.”

Moving to a space station at the edge of the galaxy was always going to be the death of Hanna’s social life. Nobody said it might actually get her killed.

The sci-fi saga that began with the breakout bestseller Illuminae continues on board the Jump Station Heimdall, where two new characters will confront the next wave of the BeiTech assault.

Hanna is the station captain’s pampered daughter; Nik the reluctant member of a notorious crime family. But while the pair are struggling with the realities of life aboard the galaxy’s most boring space station, little do they know that Kady Grant and the Hypatia are headed right toward Heimdall, carrying news of the Kerenza invasion.

When an elite BeiTech strike team invades the station, Hanna and Nik are thrown together to defend their home. But alien predators are picking off the station residents one by one, and a malfunction in the station’s wormhole means the space-time continuum might be ripped in two before dinner. Soon Hanna and Nik aren’t just fighting for their own survival; the fate of everyone on the Hypatia—and possibly the known universe—is in their hands.

But relax. They’ve totally got this. They hope.

Once again told through a compelling dossier of emails, IMs, classified files, transcripts, and schematics, Gemina raises the stakes of the Illuminae Files, hurling readers into an enthralling new story that will leave them breathless.

When I found out Gemina's protagonists were about two completely different characters, I was bit skeptical. But I should not have been. Because Gemina was just as unique as Illuminae in plot, characters, and twists. And my god, the twists.

Gemina is about Hanna and Nik, two residents of the Jump Station Heimdall. The same Jump Station the ship Hypatia, carrying the survivors of the BioTech invasion on Kerenza, including Kady and Ezra, are heading to. Except everything changes when a BioTech team arrives and takes over Heimdall in preparations to destroy the incoming Hypatia ship and all witnesses of BioTech's evil deeds.

Meet Hanna: station captain's daughter, living the high social life and maybe a little bit spoiled. The flip side? She's a serious badass, owns about a million black belts, and has been playing strategy games with her father every since she was young. So when BioTech invaded her home, Hanna did not hesitate at all to fight back. And holy cow, did she fight back! She took down a fair number of the professionally trained team that was sent. I loved her so much!


Using the zip ties to secure the operative's wrist and ankles, [Hanna] leaves [the operative] unconscious on the floor, then reaches inside her jumpsuit to pull out her lipstick and leans down to scrawl a message on the floor in bright crimson:
Who's next?
Come play!
HD xoxo.


My god, the scare-factor in this book was right up there with Illuminae. You thought being trapped on a spaceship with a contagious zombie infection going around was horrifying? Try being stuck on a space hub, with an unsuspecting breakout of alien parasite lurking about that target your brains and will eat you from the inside out. It's not like Hanna or Nik needed anything else to worry with a squad of killers sent to destroy the Hypatia ship after them too, right?

Kady and AIDAN (AIDAN!!!) made a reappearance! Though they weren't as essential as Hanna and Nik, they played crucial roles in the overall plot. Especially when that TWIST came about, which required AIDAN to handle...if you know what I'm talking about, HOLY CRAP THAT WAS SO TRIPPY!!! But in such a cool and mind-bending way. And the way the book layout was done to reflect what was going on to both Hanna and Nik was absolutely brilliant!

There wasn't a dull moment in Gemina; everything was fast paced, nothing ever slowing down. Not to mention that you experienced the entire scope of emotions when reading: trepidation, hope, relief, devastation, triumph, fear. Also, a super neat thing: there were Easter eggs in the book! Among the list of about 50 unfortunate people who meet an untimely end were a few familiar names, including Leigh Bardugo, Victoria Aveyard, Veronica Rossi, and a few other big names. Meaning essentially, all these author's characters have also died with them, noooo!

All in all, Gemina is a treat not only for the reading minds, but for the visual eyes. From the formatting of the book to the drawings (Marie Lu drew them!!! Ahhhh, that is super cool!!!) to the small tidbits of information sneakily hidden at the sides of the frame, this book is worth everything. I cannot wait to read the next (and final--noooooo) one to see what other brilliancy the authors come up with!