Review: The Hammer of Thor by Rick Riordan 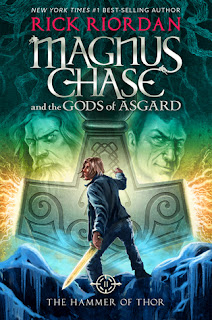 
Thor's hammer is missing again. The thunder god has a disturbing habit of misplacing his weapon--the mightiest force in the Nine Worlds. But this time the hammer isn't just lost, it has fallen into enemy hands. If Magnus Chase and his friends can't retrieve the hammer quickly, the mortal worlds will be defenseless against an onslaught of giants. Ragnarok will begin. The Nine Worlds will burn. Unfortunately, the only person who can broker a deal for the hammer's return is the gods' worst enemy, Loki--and the price he wants is very high.

Two words: Alex Fierro. Because Alex was the star of this entire book.

After a slightly disappointing beginning to the Magnus Chase series, I was hesitant on reading the sequel. But I had heard good things about it, that it was better than the first book, so I finally pulled my head out of my TBR stack and read this one.

First off: I absolutely loved the new social themes Riordan introduced. From the first book,  the author addressed a lot of social stigmas. He continued to do so in this book, broadening the scope. Riordan demonstrates through his characters that people are NOT defined by their culture or sexual orientation; it was by no means a driving force of the story, and rather was just an inherent part of who they were. It was as trivial as someone who chooses to wear a fedora every day (fedoras are cool--don't let anyone tell you different!), in no way affecting their strengths, weaknesses, or decisions.

Let's jump to the best part of this book: Alex Fierro. The spunk, the fierceness, the sheer uniqueness of Alex; it was all such a breath of fresh air. Plus Alex uses a pretty awesome weapon: a garrote, which is basically a length of wire that is specifically used to strangle someone. That's not a weapon you see everyday, and holy hades, does Alex use it like badass! What I also enjoyed was Alex's interactions with everyone else. Alex held absolutely nothing back, and had no issues picking a bone with someone who had issues with Alex.

Hearthstone remained to be the character who made my heart cry the most. He was my favourite in the first book, because he the first to demonstrate how he was not defined by his disabilities. I knew there was a lot of pain hiding in his character, pain that was brought out and examined in this book. It really added a new layer of depth to his character. Hearthstone's journey isn't quite done yet, so I'm very much looking forward to seeing how he resolves his internal conflict! There's a real struggle between who I like more: Hearthstone or Alex.

As much as I adore Hearthstone and Alex, this book seemed to be lacking something, though not as much as the first book. I don't know why, but there just didn't seem to be enough seriousness in the overall story for me to truly enjoy it as much as I would have liked. Yes, it was important that they retrieve Thor's hammer, but it didn't seem...imperative. Their mission was time-sensitive, yes, but it didn't quite feel so. But I still did enjoy it, especially for the growing social themes, and for the introduction of Alex. I really want to see Alex and Hearthstone work together in the next book!

And, for a change of things, I'm going to end this review off with my two ships: 1) Hearthstone and Blitzen 2) Magnus and Alex. Please let these ships sail!!!

I'd give this book 3.75, because it wasn't horrible, but there was definitely could have been more. Alas, since I can't give quarter-stars, I'll just round it up to 4.